GRAND JUNCTION, MI - Michigan has kicked off its blueberry harvest with the inaugural “First Pick,” an event that had President/CEO of MBG Marketing, a grower-owned cooperative, Founding Partner of Naturipe Farms, Larry Ensfield, introducing South Haven Mayor Bob Burr to a few growers.

“It is always a pleasure to meet our local blueberry growers and have the opportunity to partake in the First Pick,” Mayor Burr commented, according to a press release.

He and Ensfield visited Harris Blueberries LLC growers Scott and Marcy Harris, as well as Scott’s uncle, Al Harris on their 250-acre property that started out on two acres in 1978. 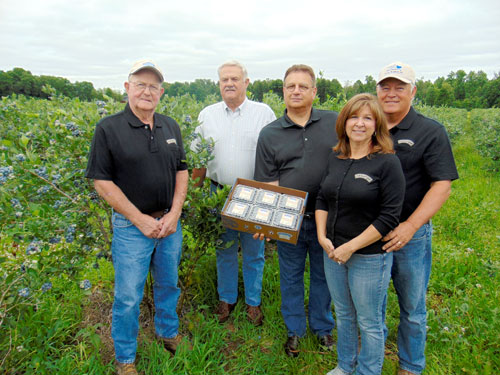 “Harris Blueberries represents an impressive number of generational family growers throughout our community who make such a strong impact both locally and throughout the United States and beyond with their blueberries,” the Mayor said.

Harris, a first generation grower who credits his uncle in helping to get the farm where it is today, is currently converting all new plantings to trickle irrigation to save water, and wind machines for frost protection.

“I relish the chance to develop a farm into something that is sustainable and can endure for generations to come,” Harris said, whose daughters and extended family members are also becoming involved in growing blueberries. “I want to ensure they understand the value of our work and take pride in the product we produce for consumers.”

Growers of Naturipe are aligned with the Cultivate with Care™ program, the company said, which has a commitment to environmental stewardship. Naturipe’s early season varieties Bluetta and Duke which will peak the first half of July, with Blue Crop, Draper, Liberty looking to peak around the last two weeks of July and through mid-August, and Elliot and Aurora, among others, to give a strong late season, supplying the eastern U.S. through September.

As Michigan, one of the largest blueberry-producing states, looks to another bountiful season, AndNowUKnow will bring updates as we move through the summer months and beyond.