Hurricane Willa Crosses U.S. as it Weakens Into a Tropical Depression

MEXICO - Although Hurricane Willa decreased from a Category 5 storm to a Category 3 when it made landfall, it still unleashed destructive winds and heavy rainfall on parts of western Mexico from late Tuesday, October 23, into Wednesday, October 24. By Wednesday morning, Willa had weakened to a tropical depression.

The storm is expected to dissipate over northern Mexico by Wednesday afternoon, but it will bring downpours and flooding/mudslide risks to the states of Durango, Zacatecas, and Coahuila into Wednesday night. AccuWeather reported that moisture from Willa will be pulled northeastward into the southern United States, which could cause additional flooding problems in the coming days.

Shedding light on this northeastward movement is CBS Meteorologist Jeff Berardelli, who predicts that the remnants of Willa will cross the Gulf of Mexico, dump heavy rain on parts of Texas and the Southeast, then merge with a cold front to form a powerful storm that will travel the eastern seaboard form Virginia to New England. 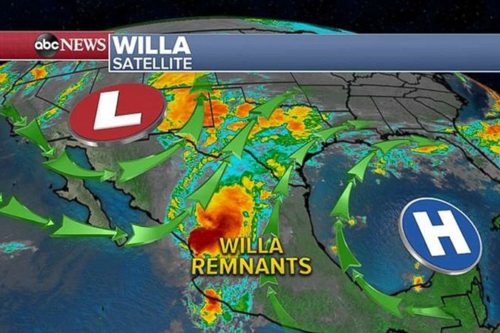 According to a report by Reuters, the storm brought winds of over 100 mph, causing widespread power outages and damage to homes and businesses. No crop damage has been reported at this time.

For more on how this hurricane season will pan out for fresh produce, stick with us here at AndNowUKnow.