FISHERS, NY - The New York Apple Association (NYAA) has announced the kickoff of the apple season in New York where more than 11 million apple trees statewide are starting to blossom.

“Mother’s Day weekend is typically when we expect to see the first blossoms appear,” said Cynthia Haskins, NYAA President. “The different regions of the state are usually no more than 10 days apart from each other in the process.”

According to a press release, NYAA declares bloom on behalf of its membership, the 600 commercial apple growers of New York who produce roughly 29.5 million bushels of apples annually. New York apple growers make New York the second largest apple-producing state in the U.S. and enable New York to maintain a leadership role in the industry together.

“Apple blossom is always an exciting time as it represents a budding new crop,” said Haskins. “The Association has been busy designing new three and five-pound poly bags and totes as well as new collateral, new demo kits, and retail and foodservice promotions. Just like apple blossoms for the new season, all things are new!” 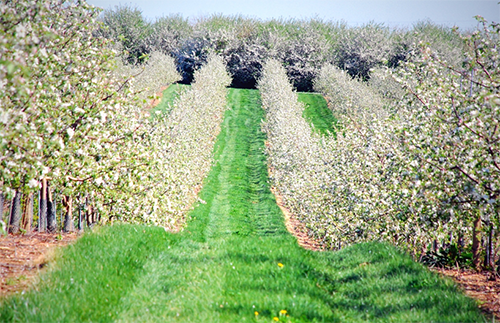 Across the country, New York apple growers offer retailers a wide array of varieties, each with New York’s signature flavor and color. All are pleasing picks for snacking, baking, cooking, and more. Some of the earliest season varieties are typically Jersey Mac, Ginger Gold, Paula Red, Jonamac, and Zestar followed by favorites like McIntosh, Gala, and Honeycrisp.

“New York is proud of the many varieties we grow,” added Haskins. NYAA markets New York apples under the Apples From New York™ brand and makes collateral and demo materials available to retailers upon request. In August, the 2019 fall harvest is expected to begin.

BrightFarms Elevates its Leadership Team with Abby Prior and...