LIMA, PERU - This week started with a rattle for growers and residents of northern Peru, as Monday brought a strong 6.2-magnitude earthquake to the country. According to the Peruvian Geophysical Institute, the quake struck east of the city of Mancora at a depth of 18 kilometers (around 11 miles).

While this part of Peru is not heavily populated, source Temblor reported that shaking was felt in the city of Guayaquil, which is home to 3.5 million people. According to the U.S Geological Survey, shaking was mainly reported close to the epicenter and in Guayaquil, and that damage and fatalities are likely to be kept at a minimum. 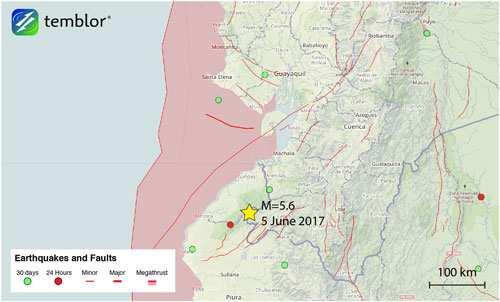 While Peru sits on the so-called Ring of Fire, an earthquake-prone zone across the Pacific, the country’s last major earthquake was a decade ago, when a 2007 quake hit a magnitude of 7.9.

According to our grower sources, July is usually the kick off of peak season for both avocados and asparagus in Peru. The country also contains an active summer mandarin and citrus growing region. We have yet to receive word that growing, harvesting, or transportation will be affected by the quake, but our ears are to the ground for any updates to this story.