It appears the majority of eastern Missouri, southern Illinois, and western Tennessee escaped any serious rains from Hurricane Barry. As of late Monday evening, rain totals for the past 48 hours were under 1.50 inches for this region. There may have been isolated areas with higher totals, but this info is not available from the National Weather Service (NWS). This should be good news for the local watermelon deals coming out of these areas. 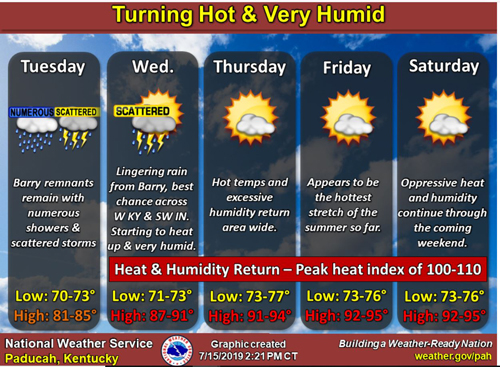 What these growers do need to be worried about is an extended heat wave starting tomorrow and continuing through the weekend. This heatwave will encompass most of the Midwest. The NWS is forecasting highs in the mid-90°s, with excessive humidity causing the heat index to reach as high as 110°. This may possibly cause issues with the plants and fruit.

HEAT ADVISORY FOR THE CAROLINA COAST

Look for production to increase over the weekend and into early next week.

WEEK OF NORMAL TEMPS OUT WEST AND THEN MORE HEAT

California begins to cool down today after five days of excessive heat. We should be seeing more product in the marketplace from this heat but be careful of quality. Starting today, temperatures will drop back to normal in the San Joaquin Valley as well as coastal growing regions. Temperatures will remain in the normal range until Tuesday, July 23, and then they will rise once again through the end of that week. We will update you again on Friday.

ONE MORE SHOT OF EXTREME HEAT FOR MICHIGAN

Michigan growers, get ready for one more shot of extreme temperatures this weekend. Look for temperatures in the mid-90°s starting Thursday and peaking at 96° on Friday. Maximum temperatures will drop back down into the 80°s next Monday.

For the eastern North Pacific...east of 140 degrees west longitude: 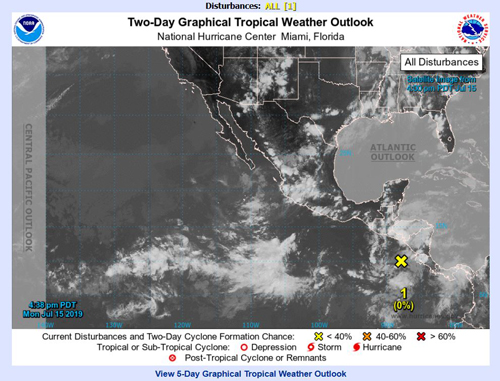 A westward-moving tropical wave located just west of Costa Rica and Nicaragua is producing disorganized showers and thunderstorms. An area of low pressure is likely to form in association with this disturbance during the next couple of days several hundred miles south of the southern coast of Mexico. Conditions appear favorable for gradual development of this system by late this week and over the weekend while this disturbance moves westward to west-northwestward at 10 to 15 mph.

Thanks again, and we'll be back on Friday with another weather report!