BAKERSFIELD, CA - A new norm appears to be forming when it comes to the California grape season. Rob Spinelli of Anthony Vineyards took the time to talk with me about what’s happening with grape growth, varieties, and what is shifting within the industry. 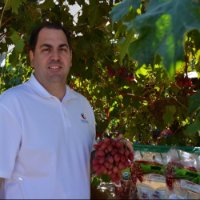 “The main start [of the season] will be early May,” Rob tells me, saying that they had actually anticipated it could have been the last week of April, but the weather had cooled off for a period that kept the season close to the same starting point as last year. “We will probably see volume on flames the week of May 11, out of Coachella.”

The much-anticipated organic flames and sugraones are finally around the corner, and Anthony Vineyards is excited to have them for the market as early and long as possible. The company is currently starting out with sugraones and flames varieties, though he said we could see the front end of the sugraones get a little tight for about a week.

“We are looking at May 6th for organic flames, then the following week for organic sugraones,” Rob said, telling me that Coachella grapes will continue through to the 4th of July, while the San Joaquin Valley could get a slightly early start, somewhere between June 25 to 29. The company will be able to provide both organic and conventional grapes through December. “We have the ability to load both at the same location throughout the season,” Rob tells me, an offer not many California grape growers can provide.

While this would traditionally be early for grapes, Rob tells me this is actually pretty consistent for the past few seasons.

“It’s about the same as the last three years, so we won’t see a gap in the supply chain,” Rob told me, adding that he anticipates an easy flow in transition, though there might be a small spike in price on reds as Mexico finishes around the middle of June.

In fact, when it comes to challenges so far in the season, the main thing to be aware of on the buy-side is that the rise in costs for water from the dry weather and the changes in labor could reflect in grape prices.

“We could see higher FOB’s due to water and labor costs,” Rob tells me. “Water is an issue in Coachella, but not as much as in the San Joaquin Valley. And everything in regards to labor costs is going up. People want to start and stay with you for the whole season, and the crop isn't always ready. So you have to find work to keep them busy.”

Because these changes are more consistent than the one season, it could be a transition rather than an anomaly in the grape industry. However, it is looking to be a fruitful season, so keep your eye out for organic options to come in soon.