TOPSFIELD, MA - Fall is the time for ghouls, goblins, and gourds, and while children and autumn-enthusiasts everywhere are picking out premium pumpkins for carving, others have different plans for their pumpkins. At the New England Topsfield Fair, the New England Giant Pumpkin Weigh-Off took center stage, where locals trotted out some truly beefy pumpkins. But there was one that stole the show. A Connecticut man’s weigh-off submission was big enough to make you say, “It’s the Great Pumpkin, Charlie Brown!”

Now, when I say big, I mean big—this whopper clocked in at 2,294.5 pounds, that’s about 48 pounds heavier than a Chevy Spark, and over 2,200 pounds heavier than a Dachshund! Though the gargantuan pumpkin was a wonder to behold, it narrowly missed the Guinness World Record Heaviest Pumpkin, which was an impressive 2,634.6 pounds, according to KCTV5 News. 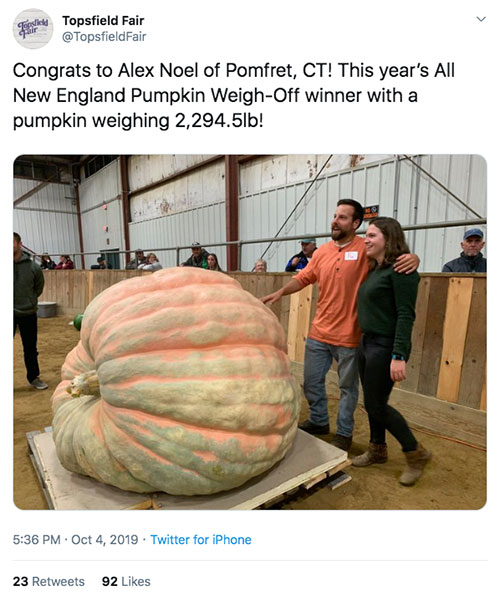 But world records aren’t everything, and the Connecticut man snagged an $8,519 grand prize, and, presumably, a lot of high fives, fist bumps, and free drinks.

Will we find a pumpkin hefty enough to beat out the Guinness World Record? Only time will tell, but until then, I’ll be headed to the nearest pumpkin patch on Halloween Eve with my favorite security blanket, to scan the skies for the flying, present-giving, Great Pumpkin.