ST. LOUIS, MO - In an attempt to survey its properties from sea to shining sea, Aldi is moving forward with renovation plans on dozens of St. Louis-based stores as it scouts out new locations to settle on within the region. This is just part of the company’s $1.6 billion master plan to renovate hundreds of stores in the U.S., and $49 million of this overhaul is going toward 37 stores in the St. Louis area.

According to the St. Louis Post-Dispatch, Aldi’s University City store, sitting at 7701 Olive Boulevard, will reopen on February 12th after major renovations have been completed since its closing last year. Further, the O’Fallon, Missouri, store, which can be found at 8615 Veterans Memorial Parkway, is moving into renovation-mode soon, with a March 16th reopening date. On top of these two stores, two Florissant-based stores, located at 2505 North Highway 67 and 11296 Florissant Avenue, are also set to get a redesign later this spring.

Dazzling consumers with a more modern design, natural lighting, and eco-friendly materials, the remodels are expected to be finished by 2020.

“We know there’s only one way to attract and keep fans: continually providing the highest-quality products, while staying true to what our competitors can’t match—everyday low prices,” said Rob Jeffries, an Aldi Division Vice President, in a statement.

While these stores get their facelift, Aldi is stepping into new locations across the market—including 1125 South Kirkwood Road in Kirkwood, a space where Petco currently resides, according to Kirkwood City Planner Jonathan Raiche. In addition to Kirkwood, St. Peters has been scouted by the retailer for possible locations, according to City Administrator Russ Batzel. 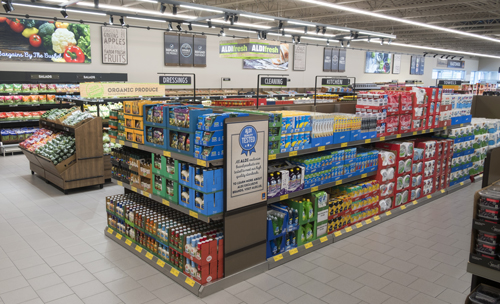 With all of the excitement swirling around expansion opportunities, Aldi has yet to comment on new locations. However, the retailer stated its plans to hold almost 2,000 U.S.-based locations by the end of the year; it currently has 1,600 up and running.

While Schnucks had the largest stake in St. Louis-area market share, with 29.2 percent, Aldi’s expansions have increased its market share from 2016’s 2.7 percent to the start of 2018’s 5.3 percent, according to the retail industry-monitoring firm F&D Reports.

How will these mass expansion plans push the industry’s evolution moving into 2018 and beyond? Will we see more international chains sprout up throughout the nation? AndNowUKnow will continue to keep you informed with the latest developments in fresh produce industry news.