Ambrosia and KIKU Apples Lead in National Volume and Growth

WENATCHEE, WA - Ambrosia™ and KIKU® brand apples are continuing to perform strongly amongst the top 15 apples nationally, according to new retail scan data from the Nielsen Perishables Group.

The data reveals that for the four weeks ending May 23, 2015 total U.S. sales of Ambrosia had a growth rate of +157 percent, the strongest among the top 10 apple varieties. Ambrosia and Honeycrisp were the only two apples in the top 10 to show an increase in dollar volume performance, according to a press release. 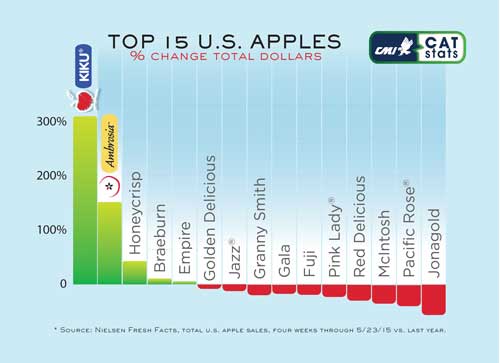 Steve Lutz, Vice President of Marketing at CMI, discussed the rising growth of Ambrosia™ among consumers.

“When you look at the entire apple category and see that only two apples in the top 10 are showing sales increases, it really shows the emerging following Ambrosia™ has with consumers,” said Lutz. “This is exactly the type of growth we saw with Honeycrisp a few years back.” 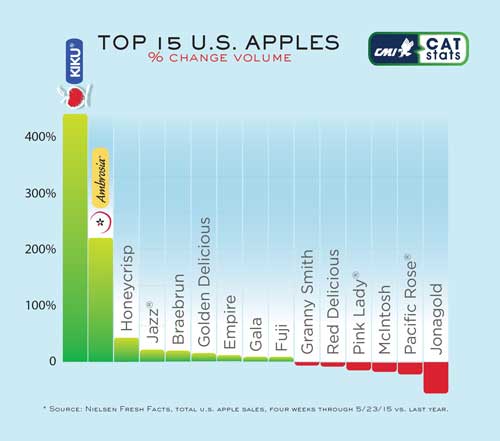 Robb Myers, CMI's Director of Sales, noted the strong performance of KIKU® apples during the month of May.

“Of the top 15 apples nationally, KIKU®’s performance increase was far and away the strongest in the category,” said Myers. “This is great news because it shows how branded apples like KIKU® can generate incremental sales for retailers even during the heart of the summer fruit season.”

Myers added that supplies of New Zealand KIKU® will be available through the summer months into August.

For the total apple category, volume moved up by 2.3 percent during the month of May. Declining retail prices, however, offset the volume increase leading to an overall decline in apple category dollars of 6 percent.