Frieda's Picks Four Veg-Centric Trends to Take Off in 2017

LOS ALAMITOS, CA – In recent years, vegetables are increasingly taking center stage. Retailers are taking notice; as the arc of food trends curves more and more toward fresh produce, those that want to stay competitive must get ahead of shoppers demands for increasing quantities—and varieties—of fruits and veggies.

“Vegetable-centric eating is finally mainstream, and it’s paving ways for the future of food and produce consumption,” said Karen Caplan, President and CEO of Frieda’s Specialty Produce, in a press release. “Retailers are embracing this change by expanding the number of vibrantly colored vegetables and providing more produce variety for shoppers.”

Frieda’s, a forerunner in fresh food trends for years, has identified four emerging produce trends that sellers can capitalize on in 2017:

As root-to-stem cooking makes its way from restaurants to home kitchen, Frieda’s predicts that specialty radishes—popular with chefs for the last few years—will take hold with shoppers. A variety of radish varieties were recently featured on Bravo’s “Top Chef Charleston”—from daikon to French breakfast to watermelon radishes. Vibrantly-colored, brightly-flavored, and capped with nutritious, edible tops, radishes are an attractive item to feature and may wind up being the kale of 2017. 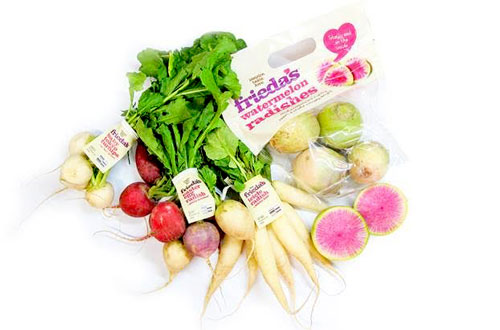 Cauliflower has been on the cusp of a renaissance of late, and with consumers increasingly eyeing purple veggies this year, purple cauliflower might push this category over the brink. Gorgeously-arranged vegetable trays and pickle boards featuring the cruciferous vegetable are already popping up on gourmands’ Instagrams. Even TV Food Personality Alton Brown called cauliflower the “ingredient of the year” in 2016.

Squash isn’t just for Fall anymore. Consumers’ demand for soups, grain bowls, and spiralized noodles could push hard squash to the forefront in 2017. Butternut, delicata, and other hard squashes are nutrient-dense and hardy, capable of carrying an entrée, and are increasingly becoming the darlings of veg-centric cooking.

Jackfruit, lychees, dragon fruit, and starfruits are increasingly-trending, with consumers becoming more and more fond of trendy tiki cocktails and island cuisine. And aromatics like turmeric, ginger, and lemongrass are along for the ride!

Retailers looking to boost sales can take advantage of these on-trend categories. For more on fresh produce trends, check in with us at AndNowUKnow.