ACAMPO, CA - For Bayer, developing and improving a crop is more than simple product development—it’s an important part of providing for a growing worldwide populace. Who are these important breeders working tirelessly to ensure a crop’s continued viability and deliciousness? We tapped Melon Breeder Alexandre Galea to fill us in.

“Melon is a strategic crop for the company and we really want to be a leader in the category,” Galea tells me, adding that the company has a talented crew bringing expertise to every aspect of the melon breeding program. “A lot of people are involved in the process—from the cell biology and molecular marker team in West Sacramento, to the people working in the nethouse and field here in Acampo.”

Galea grew up in the south of France and studied Agronomy and Plant Breeding at Montpellier SupAgro, a school off the Mediterranean coast devoted to agricultural science, and later at the University of Madison, Wisconsin, and Texas A&M. While, initially, Galea was hired to work on Charentais melons in France, he aspired to return to the U.S., and eventually was hired by Bayer to do just that. 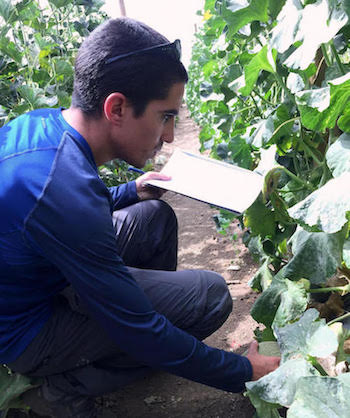 After a year working for the company in Murcia, Spain, Galea transferred to Acampo, where he is responsible for Bayer’s cantaloupe and honeydew breeding programs in both the United States and Central America.

Now, he and the rest of Bayer’s team are hard at work both improving preexisting varieties and working to develop new melon varieties that are both grower-friendly and flavorful.

“We have increased our number of screenings with growers to find the hybrid that will really fit their needs,” Galea explains. “And while we are working on diseases and pests affecting melons—like aphids and CYSDV—we’re also using flavor as a key element in hybrid evaluation and testing our new varieties with panels to better understand the characteristics that consumers like.”

For more on this and other exceptional companies in the produce industry, stay tuned to AndNowUKnow.

Bayer is with annual sales of about EUR 6.8 billion one of the world's leading innovative cropscience companies in the...