MONTEREY, CA - The produce department is changing, and one of the ways we have been watching it evolve is the accelerating growth of the organic sector. Organic fresh produce just this year alone, has increased by 8 percent in dollars and accounted for $1.25 billion in sales at the end of the second quarter 2017. The segment also experiences a 10 percent rise in volume from the previous year, according to the Organic Produce Network (OPN) who has partnered with Nielsen on the data.

“Looking at these trends, it is clear that there is a continued interest in organic produce and a movement toward transparency in general,” Matt Lally, Client Manager for Nielsen Fresh, stated. “Today’s consumer is interested in eating simpler, cleaner products and this is reflected in the continued growth we are seeing with organic fresh produce.” 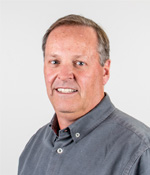 “It’s clear growers and shippers are clearly responding to continued interest in organic fresh produce by increasing production and availability of key commodities," said Matt Seeley, CEO of the Organic Produce Network. “For their part, it appears retailers are working harder as well to ensure that in-demand organic produce items are represented on their shelves.”

Now for one of my favorite categories: packaged salads. The $234 million-dollar organic packaged salad category led the pack in terms of sales during the second quarter this year, accounting for 19.5 percent of organic produce sales. With of 5.6 percent volume growth compared to a year ago, OPN shares that this could be an indication that lower retail prices are helping to boost sales in the category.

Representing baby peeled carrots, green beans and vegetable trays and medleys, and more, the $47.5 million value-added organic produce category saw a 2.7 percent increase in dollar sales and a 4.5 percent jump in volume during the second quarter of 2017 compared to last year, with overall retail prices about two percent lower than the same period last year. Consumers love their value-added vegetables, while value-add fruit was down close to 6 percent in volume at the end of the second quarter.

OPN reports that more than likely, higher retail prices in this category segment, some 4 percent on average for organic fruit vs. a year ago, curtailed consumer interest. The impact was noticeable in watermelons which saw a 13 percent rise in average retail price but a 67 percent decline in volume compared to a year ago. Honeydew melons which had a 47 percent jump in price and saw a 60 percent decline in volume during the same period. 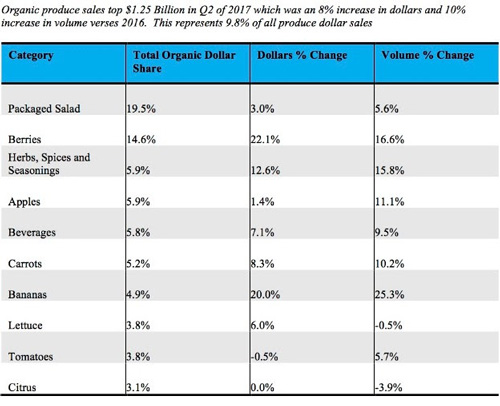 So, how are berries faring as they see unprecedented growth and demand? During the second quarter, the $175 million-dollar berry category accounted for the second highest share of organic sales and had an average retail price of $4.19, the release notes. Berries, which represented 14.6 percent of organic produce sales in the second quarter, saw a 22.1 percent jump in dollars and 16.6 percent increase in volume compared to a year ago. Organic berry growth continues to be at a faster pace than its conventional counterparts, while berries as a whole have been on a strong upward trend for some time.

As a staple in the produce department, we knew bananas had to weigh in. The $59 million-dollar banana category, the third largest fruit segment behind berries and apples, experienced a 25 percent increase in volume over 2016. For the delectable pineapple, this category saw a 35 percent jump in volume during the same period.