The Peach: A Growing Up Story

YANGTZE RIVERY VALLEY, CHINA - As any archaeologist will tell you, the modern peach is the end result of generations upon generations of extensive selective breeding. The sweetness, size, and texture of the fruit we enjoy today is a far cry from the peach our ancient ancestors might have picked - a small, acidic, greenish-colored fruit. 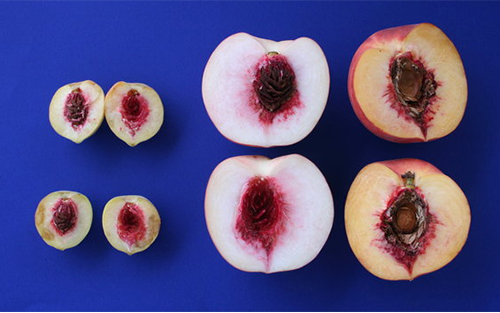 But where did the peach originate from? On this question, there is still no consensus among archaeologists, but according to NPR, new evidence may point to the lower Yangtze River Valley in southern China.

In a study recently published in PLOS ONE, Gary Crawford, paleoethnobotanist at the University of Toronto, Mississauga, reported that farmers in the Yangtze River Valley long ago began farming an early form of the peach, although much smaller and whiter in color than its modern counterpart. Interestingly, radiocarbon dating analysis revealed that these farmers were already using relatively sophisticated grafting and fruit reproduction techniques.

That the fruit could be traced back to Yangtze River Valley came as a surprise to historians. Prior to the release of this study, the peach was commonly traced to the northern or western regions of China, according to NPR.

"It's kind of a monkey wrench in the works," Crawford shared. "Everybody's been saying western China or northern China, but now we're saying the data are coming from the lower Yangtze Valley."

Through the examination of the length, width and suture diameter, in addition to radiocarbon dating, Crawford's findings further reveal that the peach was domesticated much earlier than researches had previously hypothesized. According to NPR, the results suggest that the domestication process of the peach took roughly 3,000 years, with evidence of something very similar to modern peach stones only appearing in the the Liangzhu culture about 5,000 years ago.

NPR also explains how the peach spread from its initial home in China, to Japan and India, and then throughout the known world through the trade networks of the Roman Empire. It would later make its way to the Americas during the period of European exploration.

China still has the greatest genetic diversity of peaches of any country in the modern world, with 495 cultivars, according to NPR.

"Basically they collected and started crossing it with other varieties, and they started producing seedlings out of that," says Dario Chavez, a Peach Research Specialist at the University of Georgia.

Even with their exciting findings, Crawford and his team are still searching for definitive evidence of the first peach, one predating even domestication.

"We're still trying to figure out what the wild peach actually is, what the ancestor of this peach is," he shared.

So, just remember the next time you pluck a fresh peach from a tree or out of a bin in the produce aisle, that humble fruit had a long way to go to make it to where it is today.