YAKIMA, WA - August is a busy month at the Superfresh Growers® farms as the company is now harvesting four categories of fruit simultaneously: cherries, blueberries, apples, and pears, while also preparing for kiwi berries in September. Dave Gleason, Horticulturist and Proprietary Variety Developer, took to Orchard Update Episode 50 to recap the summer harvest so far, and discusses planning for the new crop apple season. 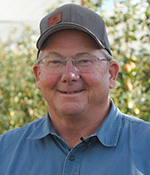 “We’ve got a lot of advantages here and one of them is intense sunlight. We have a variable climate where we get wind and rain, yet it’s a desert so we have to mitigate the risks,” Dave began. Later in the video he added, “We’ve had an excellent growing season that has produced some of the best-tasting cherries that I can remember. We’re also in the middle of blueberries, kiwi berries are in front of us, and we are on the front end of apple crop.”

With cool nights, warm days, and plenty of water from the Cascade snow pack, Washington State is one of the best places to grow apples, according to a release that accompanied the video. It is also known for its sunlight, which produces large fruit and high sugar levels. Gleason uses a Cosmic Crisp® apple orchard as an example of the structural planning that goes into orchard building. With intense sun in mind, shade cloth is utilized to protect the apples, mitigating risks.

“We’re designing into the structure of our factory the ability to mitigate some of the risks. We do what we can to measure that risk and look at the inputs that we can affect in the environment in order to mitigate that,” he said. “Every year, we’re learning a little bit more about how to put these factories together. From one year to the next, we never seem to do quite the same thing. We’re adjusting and adapting, looking at the results of what we’ve done in the past, and trying to improve.”

Watch the orchard update above to see more of the farm updates from Superfresh Growers. And, as always, stick with us here at AndNowUKnow for more exciting reports.

Superfresh Growers® is a 6th generation family owned grower and shipper of both conventional &...