UNITED KINGDOM – There’s a new app in town, and unlike other apps that help strangers meet, this app is for the hungry, not the thirsty. Designed to alleviate the imminent threat of food waste riddling our environment today and cure the epidemic of having eyes that are larger than stomachs when grocery shopping, mobile phone app OLIO is here to save the day by sharing leftover, unused, and excess fresh food and produce with strangers, friends, and anyone else who might want it.

After throwing away too much food in the midst of moving three years ago, entrepreneur Tessa Cook realized the wastefulness and unnecessity of doing so when she could have just given the food to someone else.

“I thought, ‘This is perfectly delicious food. I know there is someone within 100 meters who would love it. The problem is they don’t know about it’,” Cook said, according to a report by Reuters. When she realized there were no apps available yet to share food, she teamed up with Saasha Celestial-One, and OLIO was born.

Globally, $1 trillion worth of food and produce–mainly from homes–is thrown away every year, not only leaving it to rot and release toxic greenhouse gases into the environment, but also wasting the land and water used to produce it. However, OLIO users can download the food sharing app and upload a picture with a short description of the food they want to give away instead of throw away. Users can then contact each other via private message to arrange for pick-up. Or if users want to exchange clothes and furniture, there’s a section on the app for that as well. 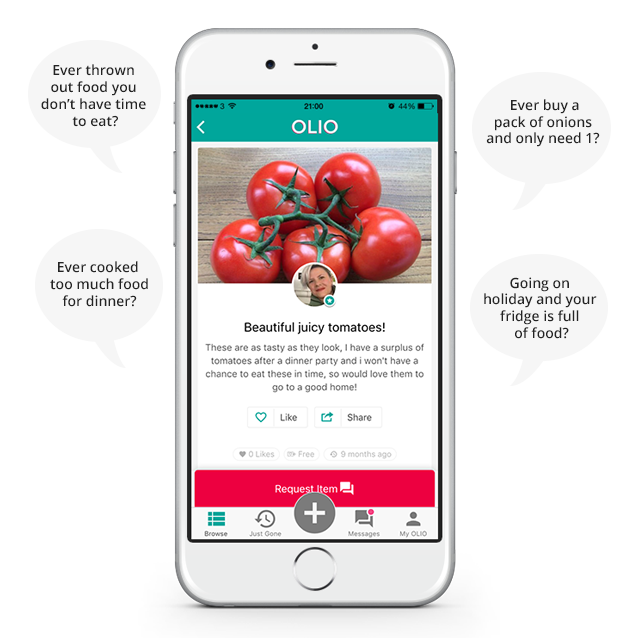 Launched in January 2016, the app has over 322,000 registered users and over 400,000 shared food items. And now, supermarkets, like Sainsbury’s, are partnering with OLIO in order to also cut back on food waste and share leftover food within their communities.

While in the past, some, like Chrissy Teigan, have taken to social media to request and dispose of fresh food and produce, OLIO is hoping to streamline this process and help users not only reduce waste and save money, but also try out new foods. And, you never know, maybe one day an OLIO user will bring fresh produce to recently revealed banana-crazed Prince Harry craving his favorite yellow fruit.

For more new happenings stirring up the produce industry, stay up-to-date with AndNowUKnow.