GEORGIA - Its reputation precedes it, according to both retailers and suppliers. Vidalia onions, with a fan-base even bigger than the acreage on which it can be grown, is returning. It brings consumers out to the grill, and forges grower partnerships spanning the U.S., like that of Giumarra Companies and Georgia-based G&R Farms.

“My grandfather started back in 1945, so we are the oldest grower/packer/shipper of Vidalia onions in the current industry now,” Walt Dasher, Co-Owner of G&R Farms, said in our latest video exclusive. 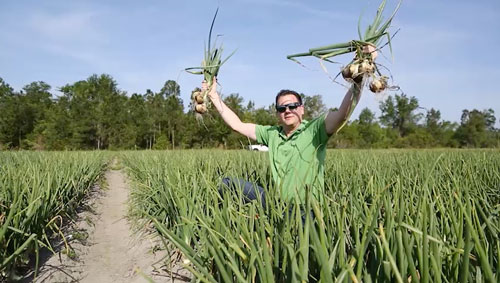 And what G&R does well is Vidalias, thanks in no small part to the Georgia soil’s low sulfur content minimizing the pungency normally associated with onions while maximizing the sugar.

“The Vidalia onion and the onion category is strong for us, but the Vidalia onion is the key onion throughout the summer months in Chicagoland. Customers actually wait for that Vidalia onion to come in, and once it comes in they really appreciate it,” Scott says in the video.

He comments on the summertime association Chicago consumers attach to the onion, among them times by the barbecue, and that Jewel Osco will promote Vidalias heavily this season, including 3 lb bags, bulk, and Chicago-area billboards.

“Once they know they’re available, the customers just buy them,” Scott assures.

Both Scott and Walt appear to agree that all sides of the industry need to know not only about the Vidalia’s signature flavor profile, but the process that brings it to market. Walt speaks of how retailers should get their hands in the dirt, while, separately, Scott comments that it’s eye-opening for him to see how the farmers actually grow the product, including the care, handling, and energy growers put into the process.

To find out more about what both men had to say about the sweet, but brief window that provides consumers with Vidalia onions, watch out brief video above.