CALIFORNIA - Skiers and the agricultural community alike are abuzz about a January that’s seeing the Golden State’s snowpack grow to above average numbers. After a wave of storms brought up to four feet of snow to the Sierra Nevada throughout the last week, ABC reported that snowpack is now well above average—reaching 103 percent the average for this time of year.

The California Department of Water Resources issued its Statewide Summary of Snow Water Content this Monday—touting more than 110 percent of normal snowpack throughout the Central and Southern Sierra—and 113 percent in the Northern Sierra/Trinity region. 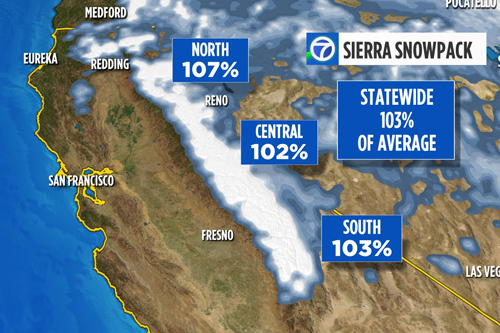 Last year, the drought-plagued state was at just 25 percent average snowpack at this time of year.

There’s still plenty of snowy season left, but the prospects are bright for California’s water supply. AndNowUKnow will continue to report with updates on this and other important growing regions as the season progresses.