CALIFORNIA - As we’ve reported, a series of supercharged storms blustered through California this month. The storms brought some much-needed rain to the valley and snow to the Sierra region, but also carried with them the threat of crop damage and increasingly difficult growing conditions. But with the constant warning of drought hanging over the heads of Californians and California-based growing operations, it is difficult to remain ambivalent: thank goodness for the snow! 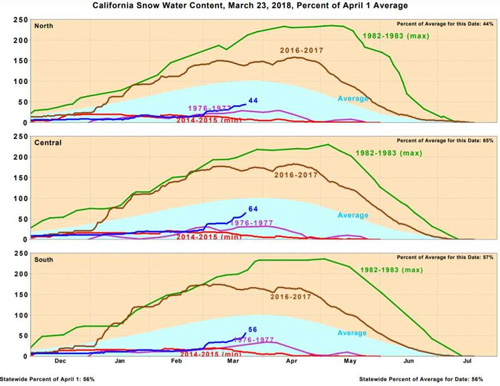 The National Weather Service Sacramento, via its twitter handle @NWSSacramento, tweeted, “In about a month, the water in the Sierra snow pack has more than tripled! Feb 22nd, there was an average of 4.6", Mar 23rd there was 15.5", going from 16% to 56% of the Apr 1st average.” 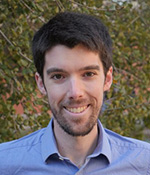 In response to this tweet, Daniel Swain, Climate Scientist at UCLA, via his twitter handle @Weather_West, tweeted, “California's snowpack has experienced a pretty amazing recovery in recent weeks, which is great news! And yet despite the feet of new powder, stored snow water still remains far below long-term average—a testament to just how bad things were in February.”

The California Department of Water Resources, which measures the snowpack annually on April 1st, reports that, as of yesterday the 27th of March, all regions—Northern Sierra/Trinity, Central Sierra, and Southern Sierra—are at normal percentages for this date. Based on data provided by the California Cooperative Snow Surveys, the snow level percentages of each region respectively are 48, 65, and 56 of long-term averages.

The snowpack is a major element to California drought prevention, meeting 30 percent of the state’s water needs, according to SF Gate. Due to weak storms in November and January, on February 20th the snowpack was just 20 percent of average with a high-pressure ridge on the West Coast blocking moisture-rich storms from the Pacific Ocean.

Luckily, March’s atmospheric storm seems to have largely remedied the situation, dropping 212 inches of snow in Squaw valley, according to SF Gate.

We will continue to report on spring storms that bring both the promise of drought relief and the threat of growing challenges and we hope you’ll stay with us at AndNowUKnow as we do.