“We sold out of our domestic Kanzi® quicker than anticipated, so we were really eager for new crop Kanzi® from our partners in Chile and New Zealand,” Myers said. “This past spring we had Kanzi® in more than 2,500 U.S. supermarkets and demand simply overwhelmed our supply. Fortunately, new crop import Kanzi® just arrived, fresh off the boat, and retailers can jump on the opportunity to snatch up this delicious imported apple while supplies last.”

According to CMI, for the most recent 13-week period ending April 30th, “Kanzi® had the highest growth rate in sales of any apple in the top 20, with the exception of Ambrosia.” The effect was that CMI sold out of its domestic crop and retailers have been anitcipating the arrival of Kanzi® apples from CMI’s Southern Hemisphere import partners.

Kanzi® has grown to be a consumer favorite from an apple-breeding program in Belgium and during the past ten years, production has expanded across Europe, the Southern Hemisphere, and more recently in North America. 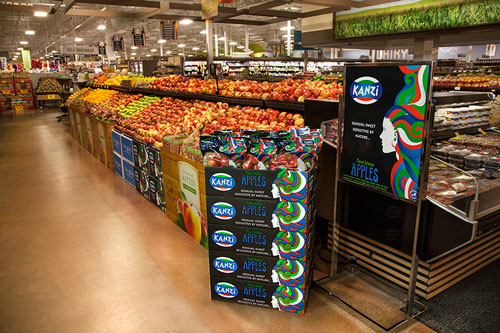 So how did CMI come by the Kanzi®? The company notes that CMI’s co-owner, Columbia Fruit Packers, purchased the production rights to Kanzi® for North America in 2008 and began planting the variety in Washington State.

Kanzi® has developed a consistent and loyal consumer base as well.

“Kanzi® has such an intense flavor that shoppers remember it,” said Myers. “Once consumers discover Kanzi® they become instant, loyal fans. Recently, during a store visit, a customer stopped us in the produce section and literally starting singing us a song she had written to honor the Kanzi® apple.”

Southern Hemisphere Kanzi® will be available through the summer months with limited supply.