EUROPE, UKRAINE, & RUSSIA - Several companies across Europe, Ukraine, and Russia have all been affected in a new batch of widespread cyber attacks this morning, reporting disruptions that have government organizations taking notice.

Referred to as a “ransomware” attack by the British National Cyber Security Centre, this term generally is used in cases where a malicious software is programmed to blocks access to an affected party’s data, but can also be used in cases where the programmer would threaten to publish or delete said data.

As reported by Reuters, a Ukrainian media company that was one victim of the attack said its computers were blocked and it had received a demand for $300 worth of the Bitcoin crypto-currency to restore access to its files.

The message said, according to a screenshot posted by Ukraine's Channel 24, "If you see this text, then your files are no longer accessible, because they have been encrypted. Perhaps you are busy looking for a way to recover your files, but don't waste your time. Nobody can recover your files without our decryption service."

Reuters confirmed that this same message was one that appeared on computers at Maersk offices in Rotterdam. 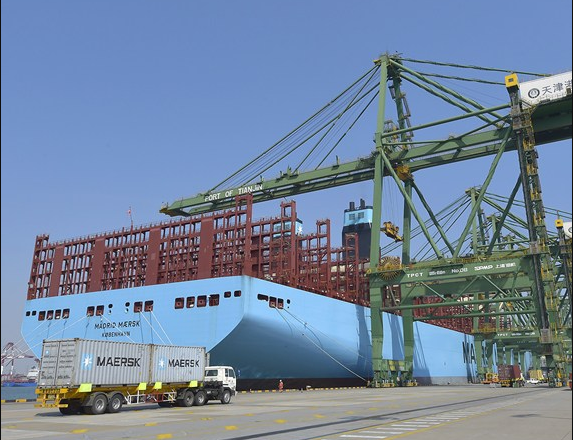 “We confirm that some Maersk IT systems are down,” the company wrote in a customer advisory email this morning. “We are assessing the situation. The safety of your business and our people is our top priority. We will update you when we have more information.”

As one of the world’s biggest shipping companies, Maersk holds a market share of about 16 percent, Reuters reports. Maersk's port operator, APM Terminals, was also hit by the attack, with Bloomberg reporting system issues at the Port of New York and New Jersey and Rotterdam in The Netherlands.

AndNowUKnow expects more information to be released as experts get to the bottom of the source of the widespread attacks, so stay tuned for the latest.