The third grader has won statewide recognition by growing a cabbage as large as he is, claiming Pennsylvania’s Bonnie Plants Cabbage Program grand prize of a $1,000 savings bond. 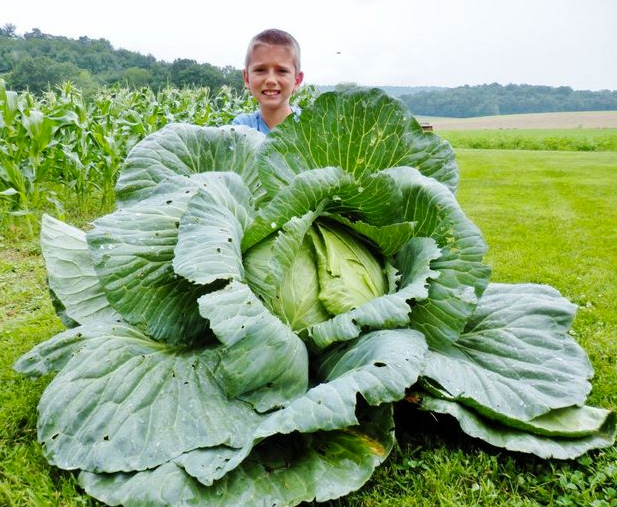 "He grew his cabbage on our family farm, which is located in the town of Burnt Cabins in southern Huntingdon County, about 45 minutes from our home," Corbin’s dad, Michael Kelly, told Penn Live. "My father is a dairy farmer and lives on the farm along with my grandmother."

While the cabbage is visually impressive, Kelly said he and his son didn't weigh the prize produce, and so don't have an official count. It was enough, however, for Corbin to stand out from the 21,985 Pennsylvania third-graders that participated in the contest, and more than 1.5 million in 48 states, according to the report.

And how did he cultivate the giant veggie?

"With good fertile soil – there is no shortage of manure on a dairy farm – and by keeping his plant weed free and watered,” Corbin’s dad said, according to the report. “He also used Miracle-Gro fertilizer on it throughout the year."

The eight-year-old does have a bit of leg up on the novice gardener. Not only does Corbin have a roughly half-acre garden on the Kelly’s farm that he has looked after since he was five, but the family has been farming in the area since 1834, and there are buyers taking notice.

With such a portfolio before he has even hit double digits, it’s safe to say that we are looking at the produce industry’s next generation already in the making.