SOUTH KOREA - There is sure to be a new pop anthem hit circulating South Korea’s air waves soon—Fantastic Banana, sung to the same tune as BIGBANG’s Fantastic Baby—after South Korean grocery chain E-mart showcased a new way of selling bananas at retail last week that left the internet—and even some of ANUK’s own—gobsmacked by the ingenuity.

According to a report by ABC 11, E-mart has devised a new way of packaging bananas in order to reduce the amount of brown bananas that end up in waste bins. Laid out in a gradient-like format with varying degrees of ripeness, the chain is selling ‘one-a-day’ packs that include six bananas ranging from ready-to-eat to too-green-to-eat. 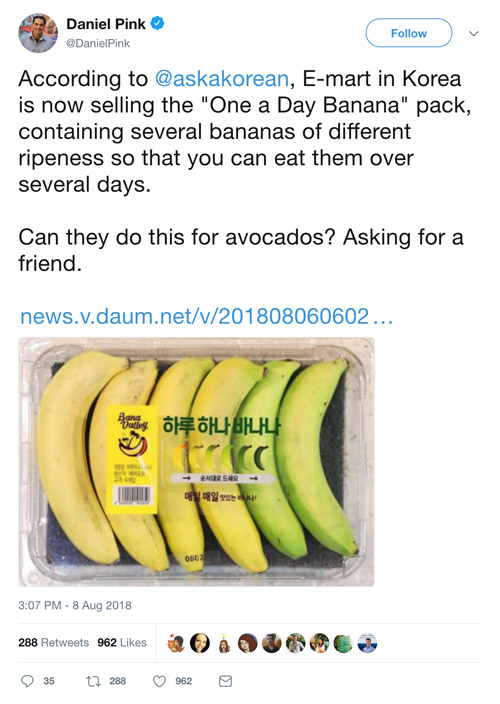 While the internet is celebrating the hack, some have raised environmental concerns regarding the amount of plastic used to sell bananas in this way. Optimists still hoping the new format will stick and cross to grocery stores across the seas have suggested shoppers could instead select their own assortment of ripe and under ripe bananas in order to reduce the extra plastic waste.

The one-a-day packs are also suspected to be more costly as grocery staff will presumably need to pick out the fruit each day.

Wow, Fantastic Banana! (I hope I’m not the only one getting a kick out of this reference.)

For more fruit and veg hacks catching our attention around the world, stay up-to-date with AndNowUKnow.