ELGIN, MN – Creating new opportunities for retailers, and receiving rave reviews thus far, Honeybear Brands’ Pazazz variety is making a splash in the produce department. Debuted in December of 2016, the company said its proprietary variety has been shattering retail sales targets this winter.

“We’re looking at the sales numbers and receiving feedback from our retail partners as we speak,” said Don Roper, Vice President Sales and Marketing, Honeybear Brands. “We’re thrilled. Pazazz did exactly what we designed the variety to do: offer a truly exceptional variety to help drive new revenue for retailers as well as provide an opportunity to extend their sales window of premium apple varieties well into the later winter months.”

Pazazz rolled out a month earlier than usual for this season, and sold faster and in more markets and retail stores than it ever has since its initial introduction. According to a press release, this response comes less than a year ahead of the variety’s nationwide rollout in 2018. 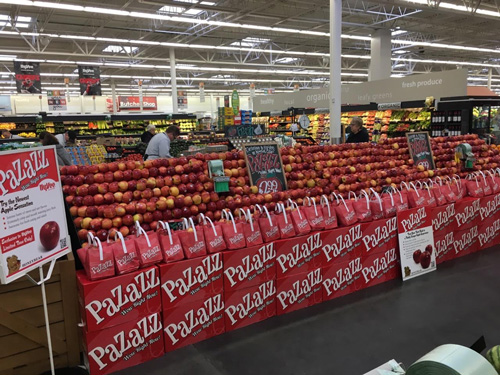 “We couldn’t be happier with the results we’ve seen from Pazazz,” stated Craig Clasen, Group Vice President of Produce Purchasing at Hy-Vee. “For a new variety, it’s performing incredibly well across our more than 240 stores throughout the Midwest and it offers many of the things we try to bring our customers with every piece of produce that they purchase–excellence in quality, superior taste and freshness.”

The variety’s early debut was due to increased production from planted acreage, as well as the continued maturation of Pazazz orchards. The arrival led to an immediate impact on pre-holiday sales as Pazazz was sold in more than 50 markets and 1,000 stores throughout January and February. Honeybear’s Pazazz retail partners included the following:

“Pazazz definitely supports our brand promise to customers by offering fruit that presents an exciting new eating experience that is unique to our stores. Pazazz’s unparalleled burst of sweet and tart flavors will keep our customers coming back for more of this awesome new apple variety,” said Joseph Bunting, Produce Business Director of United Supermarkets.

This year’s crop production increased almost 400% over last year, and has already sold out. The company noted that while it may be too early still to put an exact number on final retail sales figures, feedback has been highlighted as strong with repeat customer sales and a sharp rise in inquiries from new customers seeking Pazazz by name. 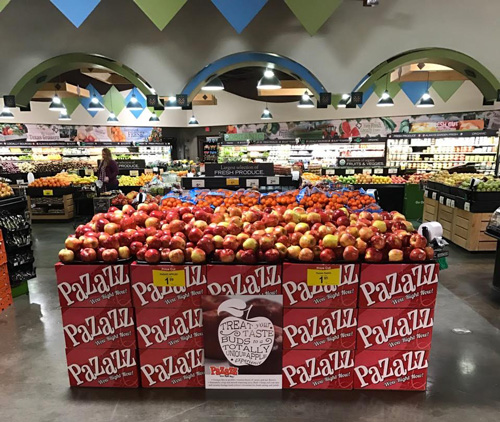 “Pazazz has created a strong following among apple lovers,” added Roper. “That’s an incredible development in just a few short years and an absolute win for retailers who are giving their customers another reason to get excited in the fresh produce aisle. It is a real testament to the unique eating experience of this apple and it’s flavor profile that has significantly raised the bar in the apple category.”

Honeybear Brands is looking to increase its number of grower partners in the Southern hemisphere as Pazazz production volumes also rise towards the variety’s national scale 2018 availability. Through this strategy, Honeybear Brands will investigate growing Pazazz in order to provide for a year-round fresh crop retail model.