MILWAUKEE, WI - Maglio Companies has announced its excitement to have the endorsement of the National Watermelon Association (NWA) for its latest technology/pouch for the ¼ sliced watermelon program. Last month we reported the company’s win of the 2015 United Fresh Innovation Award for “Best New Packaging,” and following the award, Maglio was approached by the NWA to discuss the characteristics and how it could penetrate the industry. 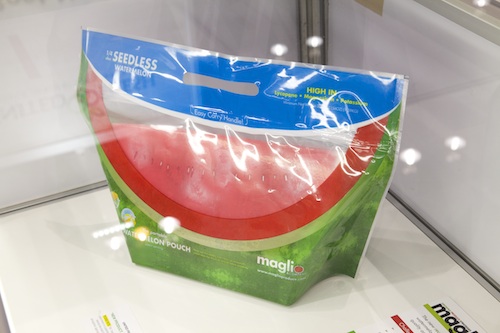 Bob Morrissey, Executive Director of the NWA describes the purpose of the organization as being dedicated to making a positive difference in the business and lives of its watermelon family. Its focus on increasing food safety awareness and helping growers become more successful are critical elements towards achieving this mission, he says.

Now, looking for innovation that can add value to the crop industry, and ultimately the consumer, Morrissey says in a press release that Maglio’s ready-ripe watermelon pouch fits the bill. 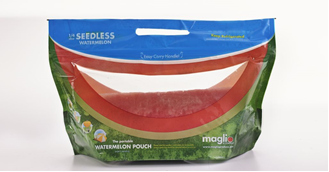 As well as offering extended shelf life of up to 11 days, compared to the traditional one to two days with an overwrap approach, Morrissey says the natural process used to preserve the taste without preservatives is impressive.

“This innovation creates real value for the consumer, while supporting our strategic imperatives," Morrissey continued. “The National Watermelon Association fully endorses the ready-ripe watermelon solution and encourages the retail and foodservice industries and watermelon processors to explore this solution.”

According to a press release, benefits to retailers include the elimination of wet and unsanitary displays, lower labor rates and lower shrink rates with each piece being 100% saleable upon arrival.

For over 100 years, Maglio Companies has proven to be a leader in providing innovative solutions to meet every customers’...