VANCOUVER, BC - I can still recall the first time my father gave me a plum to eat—I couldn’t believe anything he declared good for me could be so delicious! So, when I found out that Oppy was bringing a new variety of plum to market, my excitement was tenfold. I spoke with Eric Coty, Director of South American Imports, to learn more abut the Callisto plum.

“Oppy has brought in trial volumes of the variety in the last few years to see how it would perform in the marketplace,” Eric began. “Response from retailers was quite good! Our customers appreciated having an appealing, flavorful, late season plum from Chile to put a strong finish on the imported stone fruit season and set the stage for the new plum harvest from California. This response prompted us to brand the plum and create a bit of excitement around it.”

And Callisto is certainly a plum worth getting excited over. Its amber flesh darkens to a red hue as the fruit ripens, which, as Eric told me, was the inspiration for the name.

“The name Callisto comes from Greek mythology and is also the name of one of Jupiter’s moon. It means ‘most beautiful,’ which we thought was perfectly suited to this very pretty plum,” he explained.

Not only is Callisto a particularly pretty variety, its eating experience will keep consumers buying quality plums during the shoulder season.

“We offer point-of-sale materials that describe Callisto’s features and explains how the fruit ripens from yellow to red,” he stated. “Communicating this intriguing characteristic will help shoppers know what to expect from Callisto.” 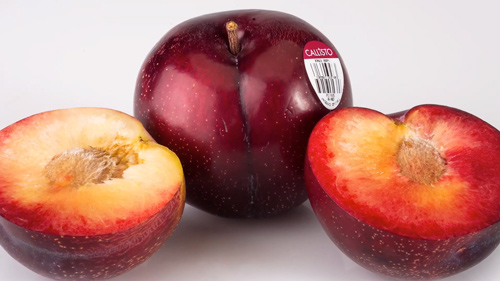 With promotions already set up with key retailers, Callisto plums are available now to Oppy customers across the United States. Oppy markets them in bulk as well as in a convenient 2 lb pouch bag, which delivers value for families and others who prefer to purchase several plums at once. (It’s like they know me!)

For the latest in new varieties, programs, and more, keep reading us here at AndNowUKnow.