In the latest edition of AndNowUKnow’s print publication, The Snack Magazine, we delve in to Prime Time International and how change is something to embrace in this industry as the company continues to grow past original founders Carl and Mark Nickerson's expectations.

“We were looking for a niche, and I think we found it,” Carl Sam Maggio of Prime Time International tells me from his desk in Coachella, California. “When we started the business we looked for an opening… and that opportunity was the year-round bell pepper category.”

Carl and Mark Nickerson, two of Prime Time’s three original Founders and Principle Owners, joined me along with Mike Way and Jeff Taylor, Owners as well, to discuss the growth of Prime Time’s bell pepper program and how change isn’t something to fear, but embrace. 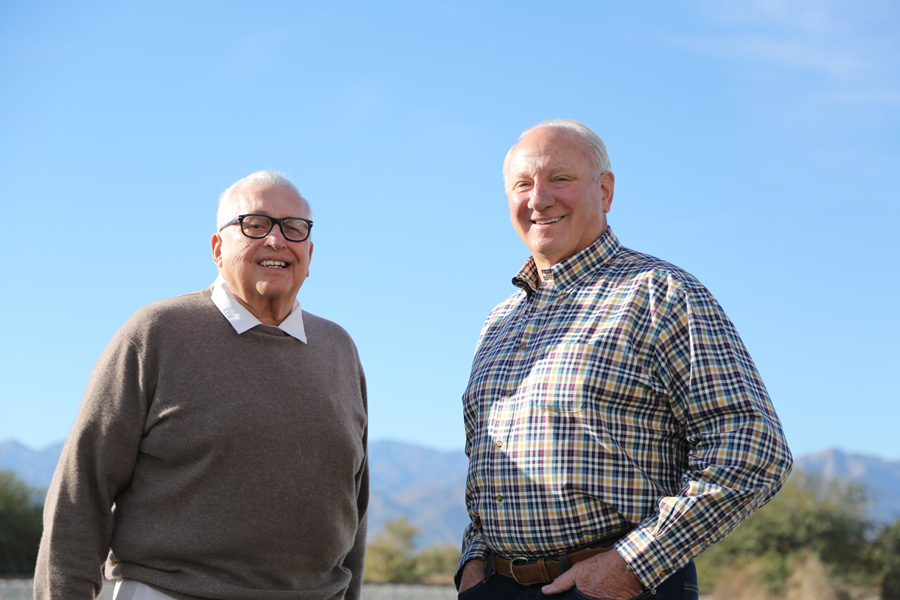 While Mike and Jeff have taken the reins when it comes to managing the day-to-day operations at Prime Time, the shift in roles now allows Carl and Mark to concentrate more heavily in developing the company’s long term goals of expanding its product line, acreage, and partnerships in California and Mexico.

“We want to make dust, not eat it,” Mark Nickerson laughs as we talk about the business model for the company. “We asked ourselves, ‘how do we maintain a business this expansive and growing?’ It’s necessary to have integrity, for starters, and a good gene pool from the industry.”

“Times are changing. By taking feedback from all levels of the business and implementing better processes, we are adapting to that change...”

“You cannot just sit on your laurels," Carl tells me.

That is where Mike and Jeff step in. As a team, these two California natives are always looking toward the next step in improving Prime Time’s operations, whether it’s expanding the company’s use of protected agriculture, and utilizing plastic and mesh houses to better control variables, to streamlining quality, consistency, and crop productivity. 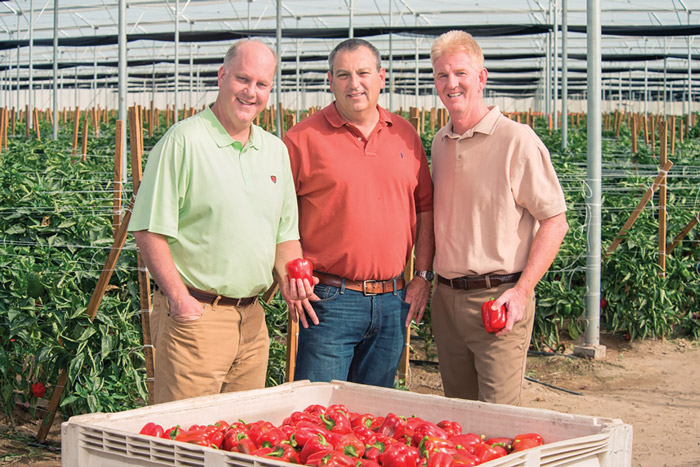 “Jeff has demonstrated an exceptional ability in leading the sales department,” Mark notes. “His foresight allows Prime Time to be more proactive and diligent when managing market conditions and mitigating risks. While he’s cautious, it’s more the caution of a fighter pilot. Meticulous, yet daring and efficient.

Jeff Taylor came into the fold a few years after Mike Way joined Prime Time, in effect solidifying the sales team. Mike brought with him a tireless work ethic and the ability to build trust with customers and partners alike.

“The more we let Mike take the reins, the more he accomplishes. He’s got a way with building relationships that is second to none..."

"While Mike also works on the sales desk and has built a loyal following over the years, he is transitioning now more to the administrative and organizational aspects of our business. Whether dealing with our largest Mexican grower, or a small scale farming operation, they both treat everyone like family,” Mark says. 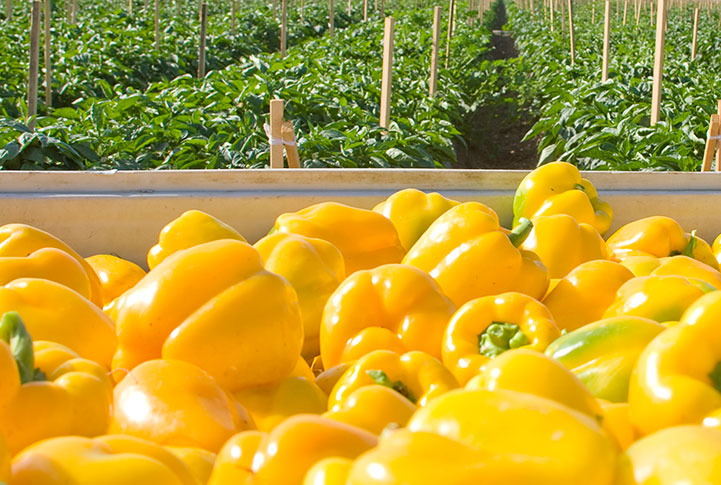 While Jeff and Mike may seem like opposites, it is those opposites that have made them such an effective and successful team.

“We all crossed paths early in our careers,” Carl notes, allowing the team ample opportunity to learn and grow together. The company’s roots date back to 1987, when Carl and Mark formed Sun and Sands Enterprises, the premium vegetable arm at Sun World during that time.

Carl had grown up in El Centro and the Imperial Valley of California. After getting out of the army in ’57, he worked for several growers including Joe Maggio, the carrot king, and also worked with Javier Tostado. Carl met Mark in ’72 and in ‘76 they entered into Sun World before forming Sun and Sands.

In 1992, Mark and Carl formed a partnership with the late Chuck Hodges, Owner of C.H. Sales, who acted as their exclusive sales agent and as distributor. Around this time, the Prime Time brand was introduced and quickly became known for its quality and ability to respond quickly to the ever-changing produce environment. In 1997, the two companies merged under the name of Prime Time International and the company began the search for its niche. The result? The colored pepper category. 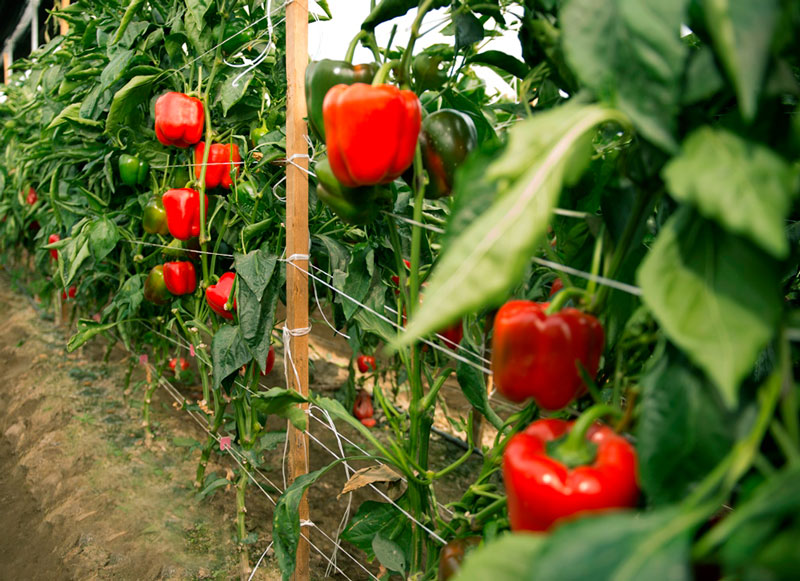 Mike Way and Jeff Taylor came to Prime Time within a few years of each other. Mike grew up in Salinas, California and graduated from Fresno State in ‘88 before joining Sun World. He transitioned to Prime Time in ‘91. Jeff was born into the industry in Coachella, California where his father worked for Howard Marguleas in the date industry. Jeff started at Sun World, then moved to C.H. Sales in ’94 before making the transition to Prime Time.

Another excellent example of a long time employee who has risen to the challenges of the continued growth is Davidi Compton, the Director of Operations. “Davidi has done a remarkable job of handling the responsibility of managing our operations in all locations,” Mark says.

So what does this vision of Carl’s and Mark’s look like?

“We have been making more investments into growing our mini pepper programs as well ramping up our availability in value added arenas,” Mike tells me. “Mini peppers continue to be a growing category at Prime Time, and acreage and production have increased dramatically to meet the rising demand.”

The company also has a recently acquired 80,000 sq. ft. packing house and distribution facility in Somis, California in anticipation of future expansion in the area. The deal not only allows Prime Time to expand its packing and shipping operations, but also to develop a line of services for other produce industry companies that includes handling, cooling, consolidation, and cross docking. Carl and Mark have been overseeing the transition to the new facility.

“Our goal is to grow our presence in Oxnard and other areas as well in the coming years and to consolidate more of our growers’ operations and resources,” Jeff notes. 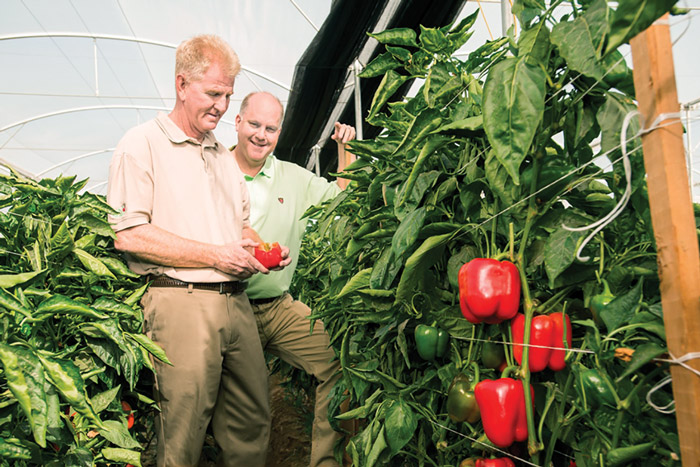 Prime Time has been focusing on giving retailers a more tailored selection of bell pepper options with its ability to pack any combination of counts and colors that a retailer might want.

“Prime Time’s fully automated flow-through packaging system enables the company to quickly change to accommodate the many requirements of our customers,” Jeff says.

“All of us are dedicated to what we’re doing..."

"There may be a lot of long days and long nights, but we refuse to cut corners,” Mike tells me.

It all started when Prime Time saw an opportunity to make a name for themselves and began to shift their focus to the bell pepper category over other produce items. The next step was to find a way to take the program year-round, and that they did.

That was more than 15 years ago. On an average day, Prime Time ships more than 30,000 cases of mini, green, yellow, orange, and red peppers from their growing areas throughout California and Mexico. The company also grows hot house tomatoes and cucumbers through its strategic partnerships in Mexico, in addition to a Coachella product mix of watermelon, sweet corn, and green beans. Today, the company operates five state-of-the-art facilities and has instituted a comprehensive quality control program in which its fresh produce undergoes numerous checkpoints and a safe cleaning process that enhances the product’s natural beauty. By operating a Good Agricultural Practices program, retailers receive a product that is of the highest quality, and both clean and safe. 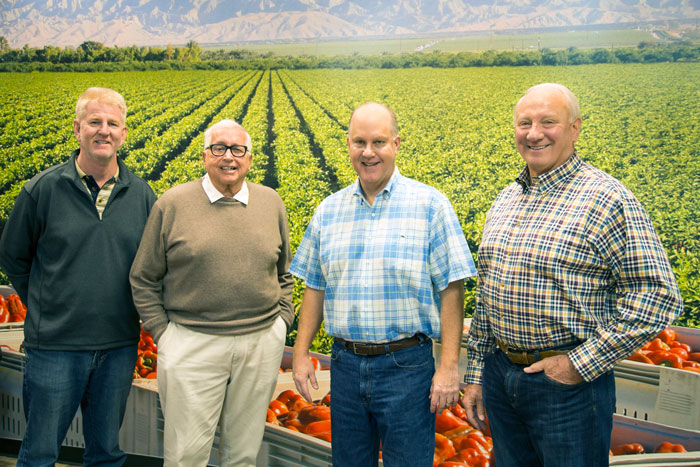 The Managing Members of Prime Time International are now composed of Carl and Mark as well as the two industry vets, Jeff and Mike. Chuck Hodges, one of the founding members of the company has since passed, but played an integral part in the success of the Prime Time plan.

Carl met Chuck at a poker game in late 60’s in Indio, California – during a time when a handful of players got together every Monday night to place their bets. “We kept a running total,” Carl laughs. “Chuck always had the most but I came in at a close second.”

“He was a natural salesman and had this sixth sense when it came to building the team. Chuck was instrumental in finding talent for Prime Time,” Carl says.

It was easy for Carl and Mark to see the talent that Chuck brought to the table. From his deep understanding of the poker game, and his ability to see a few hands ahead, Chuck applied his repertoire of knowledge to all of the moving parts that made up Prime Time.

“I’ve learned something from every relationship I’ve formed in this industry...”

“Take Cookie and Bobby Bianco,” Carl says, of the two brothers currently at the helm of Anthony Vineyards grape growing operation. Prime Time has been involved with them in various ways throughout the years and the company still has joint ventures together in several key locations. Carl tells me, “They have a perspective and a way of saying things that has always made sense to me. Cookie and Bobby have always told me ‘Never bet your shooter.’ Basically, don’t go out on limb and bet the whole ranch. It’s advice I have been given and it’s advice that I think it is important to give.” 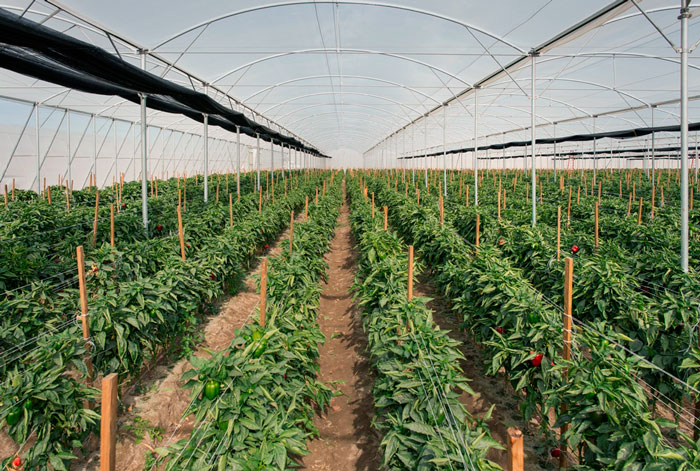 Mark says, “Being around Carl in the early days helped to create a culture of trust and cooperation. You have to treat your people with sincerity. You can’t demand respect, you have to earn it. That goes for all roles in the company.”

Over the years, the company’s vertically integrated operation has thrived, taking the benefits of its fresh produce program hand-in-hand with the hurdles. Through trial and error, the company has learned to focus its energy where Prime Time’s strengths lie - building a network of individuals to expand its year-round bell pepper program, while maintaining the integrity of the relationships that the company was founded upon.

Whether it is the combined gene pool of the Prime Time partners, Carl Sam Maggio, Mark Nickerson, Mike Way, and Jeff Taylor that continue to bring the company to new heights, or their ever-evolving philosophy, the future for Prime Time is just that… Prime for the taking.