Storms Set to Hit California with Floodwaters and Heavy Snow

CALIFORNIA - Storms last week put a serious dent in California’s drought, and a new weather front set to hit the state this Wednesday promises to further replenish our thirsty region.

Unfortunately, this increased precipitation will be accompanied by serious and potentially-dangerous weather conditions, and by mid-week, the series of storms arriving from the northwest promise to bring drenching rain and heavy mountain snow—threatening flooding and travel delays. 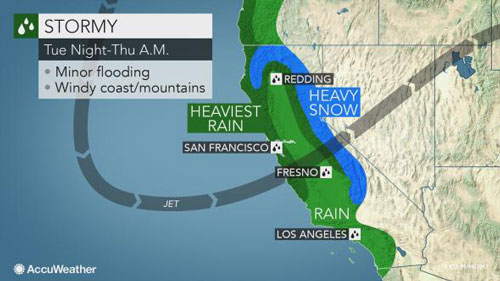 "The first storm will spread southward through California on Wednesday and Thursday with a second to follow Friday," said AccuWeather Senior Meteorologist Kristina Pydynowski, in an AccuWeather report.

Pydynowski noted that a series of three storms will pass through the state in the next week, likely bringing on flooding, delays in traffic, mudslides, and more. "Gusty winds accompanying each storm could also knock down more trees, cause sporadic power outages and make travel extremely difficult," she said. 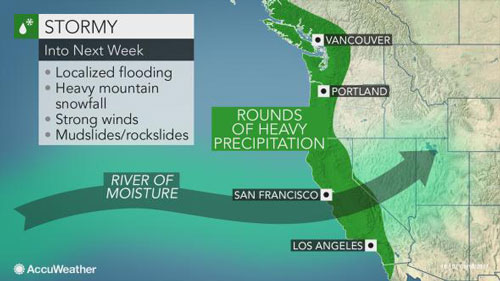 For the next week—through next Tuesday—cumulative rainfall is likely to average between three and six inches in coastal Southern California, with even larger amounts possible along the western slopes of the state’s Coast Ranges and at the western base of the Sierra Nevadas.

At higher altitudes in the Sierra Nevadas, the storm is expected to drop one to two feet of snow, and cumulative snowfall through next Monday may reach seven to ten feet in some regions. 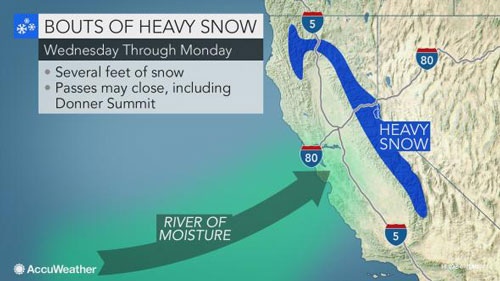 "Thus far this season, Mammoth Mountain ski area in California, has received 248.5 inches of snow with 144.5 inches falling this month, as of Jan. 16, at the main lodge," said AccuWeather Senior Meteorologist Ken Clark. "The resort is likely to achieve its snowiest January on record, snowiest month on record and could end up with seasonal snowfall that ranks very high on the all-time list."

Snow levels are expected to dip low enough to fall into intermediate elevations and potentially lead to travel problems throughout the eastern half of the state.

"Motorists should prepare for restrictions and possible road closures, including at Donner Pass along Interstate 80," Pydynowski said.

Later in the week, snow is expected to coat roads around Reno, Nevada, and threaten to blanket Flagstaff, Arizona, with up to a foot of snow.

For more updates as the week’s weather progresses, check back with us at AndNowUKnow.