SALINAS, CA - In recognition for her contributions to produce, agriculture, and the local Monterey community, Tonya Antle has been named Monterey County’s Ag Against Hunger Ag Woman of the Year for 2017. Ag Against Hunger, a non-profit organization that works with growers, packers, and shippers distribute more than 12 million pounds of fresh produce to foodbanks each year, awarded Tonya this past Friday, April 28. 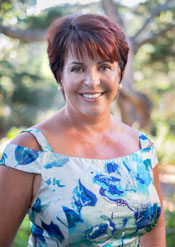 “Receiving this honor from Ag Against Hunger was both a thrilling surprise and reaffirming,” shared Tonya, Principle of Tanimura & Antle, upon receiving the award. “My career and life's work for the organic produce community has never been about me, but rather about delivering on the promise for our farmers, customers, and consumers. To be recognized for my efforts makes me proud that I played a small role in making the organic choice viable.”

Born into the ag community, Tonya laid her produce roots working on the family farm at age 10 and, following her college years, joined Freida’s at a time when women in the industry were still few and far between. Having then spent time with organic table grapes at Pavich Farms, and later Earthbound Farm, where she became an ambassador for all things organic, Tonya played a key role in the latter’s impact on the expansion of organic production and sales. A press release notes that Tonya is still one of only a a handful of true pioneers in bringing organic food and farming from the fringe to the mainstream.

Beyond her time at various produce companies, Tonya is truly passionate about her tireless volunteer work. Upon landing in Monterey County, Tonya used her position to generously give back to the community. She currently serves as a member of the Board of Directors of the CSUMB Foundation and has also served on the board of the Community Foundation for Monterey County, and as the Women’s Fund Leadership Chair, spearheading the building of the Women’s Fund endowment. According to Tanimura & Antle, she’s an active supporter of too many organizations to list, as well as an active participant in local issues.

Along with her husband Rick, Tonya was the 2016 recipient of United Fresh Produce Association’s Lifetime Achievement Award. She has served produce in many roles, including being a member at the following organizations:

Even with this very full and rewarding resume, perhaps her most important role is her mentorship of young people—especially young women. Tonya has had a profound influence on the lives of countless young people both in formal arrangements like the Pack Family/PMA Career Pathways program, the course she has taught at Cal Poly, and by being an example, a counselor, and a generous leader in both her personal and professional life.

Each year, the Agricultural Woman of the Year award seeks to honor unique leadership qualities held by women working within the agricultural industry in Monterey, Santa Cruz and San Benito Counties. The winner of this award is a person who demonstrate a significant contribution to local agriculture, is a leader for our community, and an advocate for agriculture.

Congratulations to Tonya Antle for all she has achieved, and here’s to many more years of inspiring work in the produce industry.