NORTH CAROLINA - Early on Sunday morning, a 5.1 magnitude earthquake hit Sparta, North Carolina, 100 miles north of Charlotte. It was centered just over a mile south of Sparta near the Virginia border, and reports claim it was the strongest quake to hit North Carolina in more than a century.

According to local news source The Charlotte Observer, Sunday’s earthquake was the strongest in the state since 1916 when a 5.2 magnitude quake occurred near Skyland, just outside of Asheville. It was the strongest of six reported earthquakes centered in that region since Saturday. Others in the cluster ranged in magnitude from 2.1 to 2.6, according to the U.S. Geological Survey (USGS). 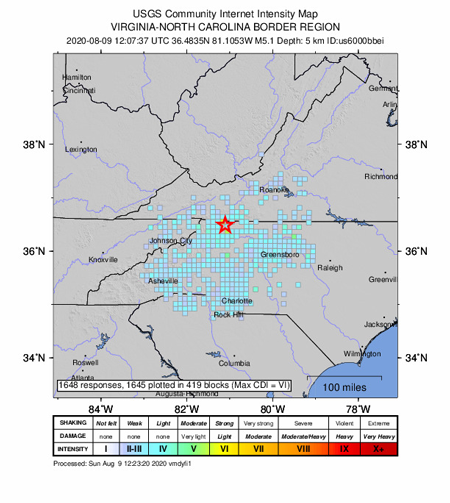 USGS officials on Sunday afternoon estimated there was a 45 percent chance for aftershock earthquakes of magnitude 3 or greater in the next week. The estimates for another quake magnitude 5 or greater are much lower, at 1 percent.

Other than structural damage, there were no serious injuries reported. As of now, there is no known effect on growing regions within the area.

We here at ANUK hope the best for residents in the areas affected and a speedy recovery for the state. Stick with us as we continue to report on the latest in weather events that have the potential to affect trade.