Authorities Discover 85 Kilograms of Cocaine in a Banana Fridge

SOUTH AFRICA - Early on Sunday morning an intelligence-driven, multi-integrated operation by the Ports of Entry team in South Africa uncovered a staggering amount of cocaine hidden amongst a shipment of bananas from Ecuador. Two containers were suspected of containing narcotics, which was quickly proven true when officials removed paneling from a banana fridge. The discovery was estimated to be worth over five million dollars USD (85M South African rand).

"The suspected containers were on board a vessel that had docked in Port Elizabeth at the Ngqura Port. The team, which included Customs Investigations, the K9 unit, and SAPS Border Police, were duly activated and the process initiated to trace and secure the two containers,” Lieutenant Colonel Katlego Mogale told IOL. "The inter-agency teams worked together and ensured that the targeted containers were removed to the container depot, and upon opening the containers it was found that the contents were bananas as described on the bill of loading. The bill also indicated that the container was destined for Cape Town." 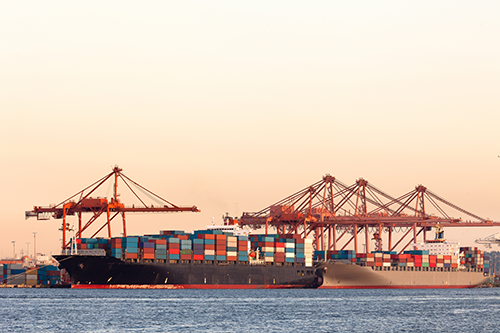 He went on to explain that the banana cartons were thoroughly searched inside and outside of the container, and while inspecting a rear refrigeration unit, a hidden compartment was discovered.

"Upon removing some of the paneling, the team discovered packages wrapped in brown tape. The paneling was removed and a total of 40 packages, which tested positive for cocaine, were discovered in both the containers,” Mogale said. “Further profiling was conducted and it was discovered that there were another two containers that were linked to the product type and packaging methodology on the same vessel. The team immediately decided to secure the containers."

The team’s sniffer dog alerted them to further inspect the rear refrigeration paneling in the remaining containers. The paneling was consequently removed, revealing another 45 bricks wrapped in brown packaging tape that also tested positive for cocaine.

"There was an estimated weight of 45 kilograms in both containers. A total of 85 bricks with an approximate weight of 85 kilograms and an estimated street value of R85 million were seized," continued Mogale. “High levels of collaboration between stakeholders at the port have once again paid off. There have been breakthroughs made as a result of the ongoing proactive fight against crime, especially the proliferation of drugs coming into and through the port. Investigations are continuing."

Thanks to South African law enforcement, yet another hidden shipment of drugs was uncovered. For all instances of drugs disguised as produce, stay with us at AndNowUKnow.