ISSAQUAH, WA – Coming up on its Q3 2016 report, analysts predict that company shares could jump as high as eight percent following the finalization of Costco's projected revenue increases, as buyers currently wait on the sidelines.

While the numbers won’t be posted until after closing bell on Wednesday, TheStreet reported the average analyst’s earnings-per-share estimate foresees the company at $1.22 per share on revenue of $27.12 billion, which equates to a year-over-year rise of approximately 4.2 percent and 3.9 percent.

"We view Costco as undervalued on a long-term basis, but prefer to stand pat until after it reports monthly sales results for May and June...” stated Jim Cramer and Jack Mohr of Action Alerts PLUS in a written statement. “Our negative short-term view is balanced by long-term optimism given its myriad catalysts later this year and into next year (card transition and membership fee hike) along with its differentiated business model that will allow it to remain relevant even in this ever-changing consumer environment."

TheStreet reported that although Costco’s retail earnings have been pressured by online consumer shopping this quarter, the company’s earnings are still projected to rise 1.13 percent from last year to $5.33 a share. Costco’s full-year revenue of $120.37 billion would mark a 3.6 percent rise from last year’s period.

Also aiding in the prospective share jump, TheStreet stated that Costco may have limited sellers as well as being a bounce-back candidate. This bounce-back trend has been seen with other retailers’ stock following their earnings quarterly reports.

TheStreet also speculated that there may be traders on the sideline who are waiting to ride Costco’s shares after missing Walmart’s strong reported run last week. TheStreet stated that the focus on this trade will be on the $154 target. 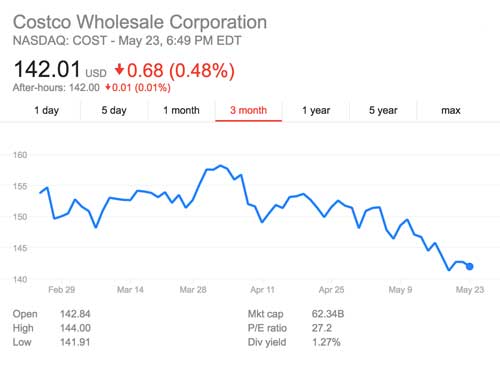 The company’s shares are down 11.65 percent so far this year when compared to a 0.41 percent year-to-date rise in the S&P 500 index, which includes five percent declines over the past three months. Last week, Costco stock closed flat on Friday at $142.69.

As Costco releases its Q3 report this week, stay up-to-the-minute with AndNowUKnow as we report on the retailer’s earning and the affect on its shares.