MENLO PARK, CA - After a year of suspected intent and speculation, Facebook has launched a foodservice pilot that challenged the likes of Uber Eats, Amazon Restaurants, and other such delivery systems to consumers.

Having kicked off late last week, the service gives U.S. users the ability to order food for take-away or delivery directly through the popular app and/or website, according to Fortune.

Partners in the pilot include:

“People already go to Facebook to figure out what to eat by reading about nearby restaurants, and seeing what their friends say about them. So, we’re making it even easier,” the company said in a release, touting a combination of food ordering services like EatStreet, Delivery.com, DoorDash, ChowNow, and Olo. 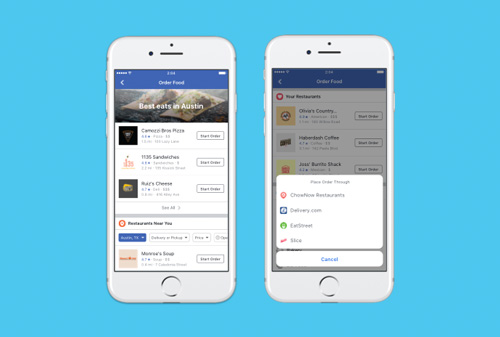 Fortune reported Facebook’s shares are up nearly 1% in early trading on Friday while shares of food order and delivery service GrubHub dropped nearly 3%.

The service allows all U.S. Facebook users, of which there are predicted to hit about 207.36 million in 2018 according to statista, to browse nearby restaurant and delivery options by going to the Order Food section in the Explore menu.

What spin will this add to convenience and consumption in our industry? The team at AndNowUKnow will be sure to keep you in the loop.