CALIFORNIA - As we here at AndNowUKnow reported a few days ago, a massive storm has hit California, creating heavy downpour and unyieldingly high winds. With the storm expected to continue throughout the week, what else does this atmospheric river have in store, and what will be the effects on key agricultural regions across the state?

According to a report from The Weather Channel, the storm is being created by a low-pressure system near the West Coast that has guided a long trail of Pacific moisture, known as an atmospheric river, along the coast of California.

The pressure system has already caused exceedingly high winds that have reached up to 65 mph in parts of Northern California’s valley region, according to information from The Sacramento Bee, leaving over 400,000 residents without power. Winds are expected to reach gusts of up to 70 mph as the storm continues to make its way through the area, and the Sierra mountain region has already hit 125 mph gusts. 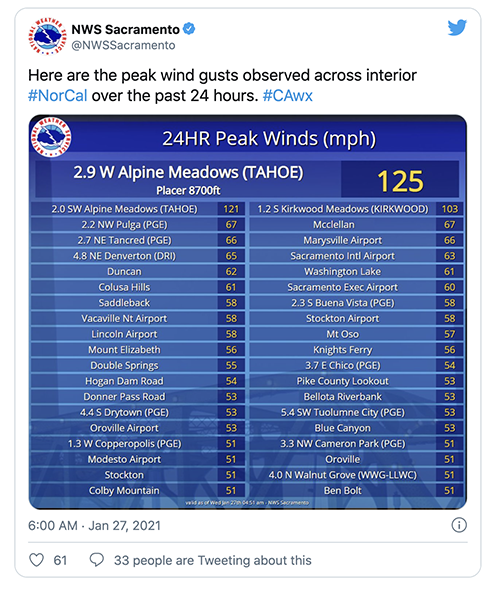 With the storm shifting over California, the Bay Area has already been hit by extreme downpour, and the storm is now expected to make its way toward Southern California as the week continues on.

Flash flood warnings have been issued by the National Weather Service (NWS) from Napa and Sonoma Counties throughout other parts of the Bay Area and south of Monterey into Thursday afternoon, The Weather Channel went on to report. Areas south of San Francisco could likely total 5–12 inches of rain, and lower altitude areas are expected to reach three inches as the storm continues on. It is likely that the flood warnings will extend into Southern California later in the week.

In the Sierras, a blizzard warning has already been put into effect by NWS. The highest elevations in the Sierra could see up eight feet of snow through Friday, with winds gusting up to 50 mph.

As the storm continues to rage on, we hope that our fellow industry members remain safe and that no extreme damage is done. For more weather updates, continue reading ANUK.