PHOENIX, AZ - Sprouts Farmers Market has yet again made gains on its most recent financial report, showing a substantial 15 percent increase in sales for Q3 over last year. As net sales climbed to a high of $1 billion, CEO Amin Maredia credited the company's success to its increased focus on fresh offerings, as well as the expansion of locations throughout the year.

“The Sprouts team delivered 15 percent sales growth, strong new store performance, and our 38th consecutive quarter of positive same store sales, all despite a highly deflationary and competitive environment,” Maredia highlighted in the report. “The core fundamentals of our business remain strong, and we continue to prioritize product innovation, investing in our team members and infrastructure for scale, and enhancing the customer experience both in and out-of-store.”

In a recorded call to investors, Maredia noted that fresh sales are nearly 60 percent of the company’s entire business, as well as an on-trend, driving force to Sprout’s business model as a whole. Just this year, the company has implemented fresh food and deli expansions in 73 new and existing stores, planning even more as the year progresses. This expansion includes a freshly prepared protein and sides full-service case, a salad bar, fresh juices, and a soup station. 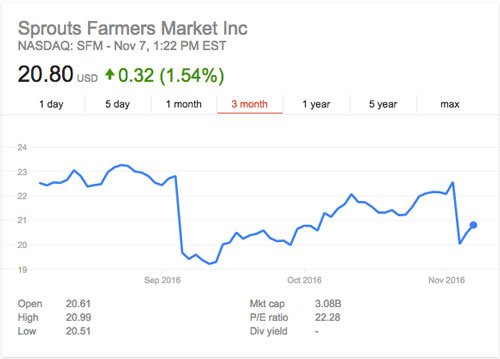 “I recently reviewed the plans for 2017 and I'm excited about adding our food and deli initiative to more existing and new stores and also leveraging this platform to enhance our fresh offering even further,” Maredia told investors in a conference call. “Our vendor partners have enabled us to build and broaden our partnerships and also launch new unique and exciting products and programs like a Hatch Chili program released earlier this summer, and new holiday items like chipotle cranberry salsa and dark chocolate drizzled kettle corn.”

In addition to Meredia's focus on the company’s fresh forays, third quarter highlights from Sprout's report include:

Sprouts added ten new stores during the quarter, with an additional three scheduled to come on line during Q4. Maredia confirmed that the company remains on track for a total count of 253 stores by year end, and is still set to enter new states, Florida and North Carolina, in 2017.