MINNEAPOLIS, MN – Target Corporation has released its 2016 Q1 report, and as the company denoted lower first quarter sales, its stocks have followed suit, dropping more than 8 percent in morning trading as reported by USA Today.

In the company’s initial financial release, CEO Brian Cornell said that the company was pleased with its Q1 finances and other increases within the report. However, according to USA Today, Cornell was quoted in a call with the media as saying, "We continue to see consumers spend cautiously. It's been a very wet and cold start to the year in the Northeast and it's been reflected in our sales."

Target's sales decreased 5.4 percent, falling to $16.2 billion from the $17.1 billion reported last year. Furthermore, Target expects its comparable sales of flat to go down 2 percent in its second quarter. The company also reported net earnings down 0.4 percent at $632 billion from 2015 Q1’s report of $635 billion. 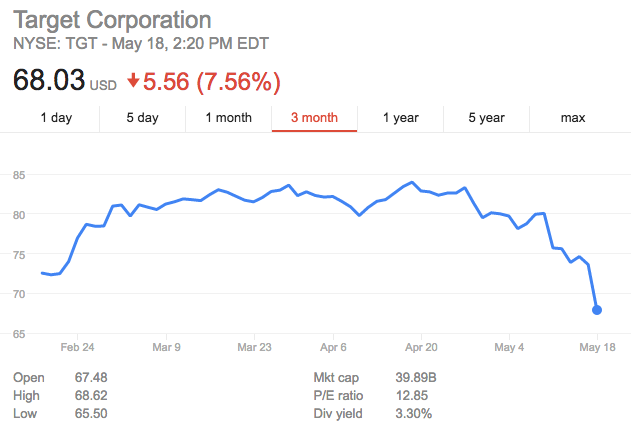 USA Today said that this announcement of lower sales, and an expected comparable sales decrease for the company’s next quarter, unnerved investors enough for Target to see its stocks plunge to $67.48 at market opening, even reaching as low as $65.50, as reported by Google Finance. Previous to the 2016 Q1 announcement, Target’s stocks were at $73.59 as of the market’s close on Tuesday, May 17, 2016.

Highlights noted from Target’s 2016 Q1 report, in comparison to 2015’s first quarter, are as follows:

Keep following AndNowUKnow as we continue to report on Target’s sales and financials in the face of changing retail strategies in the produce industry.