MINNEAPOLIS, MN – With its sights set on success, Target is looking to rise to the top of the buy-side sector swinging with two recently unveiled strategies. The company has announced a new store prototype to influence its other locations, in addition to appointing a former Kroger veteran to head its grocery operations. 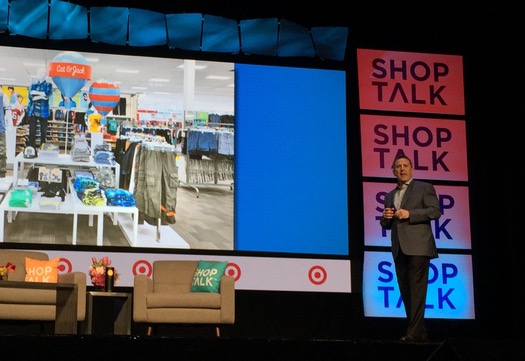 Though it does not yet have a name, Target plans to open a new concept in Houston, TX, to answer the rising consumer demand for convenience. The prototype was unveiled by Target CEO Brian Cornell during the digital commerce conference Shoptalk.

“Expect lots of flexibility, open sight lines, and discovery moments throughout the store,” Cornell said, according to StarTribune. “We’re going to take what we learn in Houston to help guide us as we customize and remodel hundreds and hundreds of stores over the next three years.”

Slated to open this fall in a suburb outside of the Houston area, one main facet of the concept will be to place all food–fresh groceries included–and beverages by the front doors in order to better facilite consumer convenience. Other aspects include the following:

Target will also shift its aesthetic appeal to include more rounded features, stenciled concrete floors, unique lighting treatments, and wood-paneled walls and beams. The company indicated that around 40 stores due to be remodeled this fall will gain some of these features right away.

Cornell emphasized that the feedback and insights gleaned from this new concept will be implemented in other stores that are being remodeled as part of the chain’s $7 billion investment strategy. The CEO also stated that the chain also plans to lower prices and launch more exclusive brands in order to create an increase in sales, in addition to marrying digital strategies with ones for its physical stores.

Furthermore, Target has appointed buy-side vet Jeff Burt as Senior Vice President of Grocery, Fresh Food & Beverage. Burt comes to the company with 30 years of experience with Kroger, most recently as the President of its Fred Meyer division.

“I’ve always admired the love that shoppers have for Target,” said Burt, according to a press release. “There is an opportunity to harness the power of the Target brand to more clearly cater to what consumers want when they’re shopping for food and beverage. I am eager to join the team to help fuel the work that’s underway and propel the business forward.”

Burt will officially join the company on April 10, and will help execute Target’s grocery strategy: to provide a differentiated guest experience through the assortment, quality, and competitive prices of its products.

“After an extensive search to find a new leader to join our team, I’m confident that Jeff is the right person for the charge. His vast industry expertise will accelerate our plans to bring a unique food and beverage experience to Target guests,” said Executive Vice President and CMO Mark Tritton, to whom Burt will report. “He’s an enthusiastic and passionate leader with the deep knowledge in food and beverage that Target needs to build on recent progress and drive future growth.”

Will these new strategies move Target up the grocery chain as it hopes? AndNowUKnow will report.