LAOS – After teaching many how to properly spell bananas, I wouldn’t be surprised if I’m not the only one begging Gwen Stefani to return to the metaphorical prowess of the yellow fresh fruit variety to explain to us plebeians what cryptocurrency is and why it’s a current hot topic. And, just think, she could even get the song sponsored by Bananacoin, the newest addition to the virtual currency universe that is peeling back the layers of investing, trading, and exchanging global cash.

After producing bananas in the Vientiane province in Laos for the past three years, two entrepreneurs and an agronomist developed Bananacoin, taking fresh bananas to a new, digital market. According to a report by Munchies, the founders are using the investments from the Bananacoin database as a means to expand their banana plantation in Laos from 100 hectares to 360 hectares in the next eighteen months.

And, while the internet is ROFL (rolling on the floor laughing) IRL (in real life), many familiar with cryptocurrency, and the future, are seeing the validity of virtually trading the popular fruit. 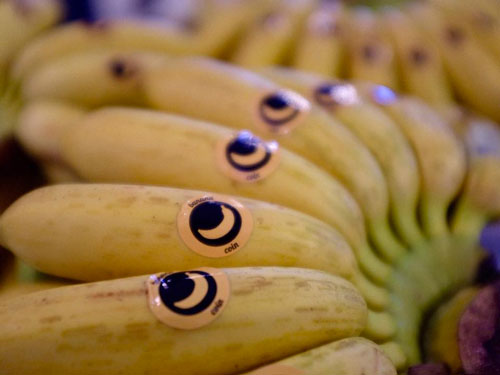 “Bananas, surprisingly, are a good investment,” one cryptocurrency analyst said, according to Munchies. “Over the past 7 years, the international price of one kilogram of bananas has increased by between 4 percent and 10 percent every year, making bananas a relatively stable investment.”

While not considered a cryptocurrency like Bitcoin, according to Financial Express, Bananacoin is an “organic token” or initial coin offering (ICO) to be used in the production of organic bananas as a model of crowdfunding that lets users issue digital tokens in exchange for investments. The price of one token is the price of one kilograms of bananas in the international market, according to the Bananacoin website.

And, not to mention, you can bet your entire bitcoin collection that Prince Harry is using and trading Bananacoin tokens–I just know it.

Cryptocurrency is bananas, B-A-N-A-N-A-S! Visit the Bananacoin website to learn more about how fresh produce is the latest commodity to take on cyberspace. For more on what’s changing the produce industry, stay tuned to AndNowUKnow.