SACRAMENTO, CA – Even though rain continues to fall this week in the Golden State, California regulators are looking forward to dry months ahead. This past week, officials have extended state emergency drought regulations.

"While we're certainly well situated compared to past years, we've learned that things can change suddenly," Felicia Marcus, Chair of the State Water Resources Control Board, said at a hearing Wednesday in Sacramento. "Warm rains in the spring or high temperatures can quickly degrade snowpack, even though we have a pretty sturdy snowpack in many places."

The current regulations were originally set to expire at the end of the month on February 28. CNBC reported that the extension will keep emergency rules in place through the spring with a review planned for May, after the rainy season ends. 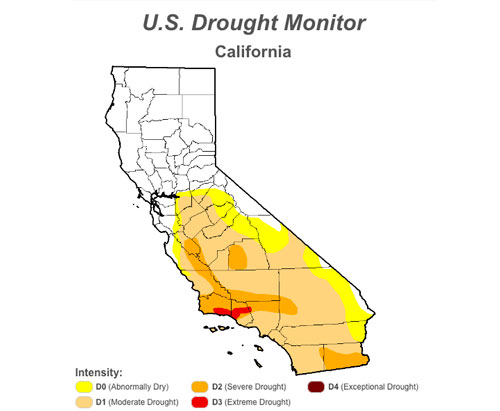 The U.S. Drought Monitor's most recent report showed around 47 percent of the state still retains some level of drought intensity–which is down from 73 percent as of just three months ago.

Significant improvements were seen to the "severe" category, down to 11 percent; and the "extreme" category only experienced by less than 1 percent of the state.

"We may see all other drought signals improve, but we may see those aquifers and well levels still lingering for quite some time just because of how slow those deep water supplies take to replenish," stated Brian Fuchs, Climatologist with the National Drought Mitigation Center and regular author of the monitor.

CNBC stated that Southern and Central regions are experiencing the most drought effects to-date, but are also likely to see continued improvements.

Will rain continue to fall upon California ground, and how will this affect the state’s drought status? AndNowUKnow will report as the news unfolds.