SACRAMENTO, CA – Following weeks of rainy weather gracing the state of California, new measurements from the state’s Department of Water Resources’ (DWR) most recent survey shows all that extra wet stuff brought a significant increase in the state’s snowpack levels. As of the February 2 report, the snowpack statewide now holds 173 percent of the average for the type of year, now at 31 inches of the 18.1 inch water equivalent average.

Of course, this is good news to those involved with California ag who have been concerned with drought levels over the past through years.

Frank Gehrke, Chief of the California Cooperative Snow Surveys Program and conductor of the survey at Phillips, reported that “we’ve got a very good snowpack, a very robust snowpack on the ground right now.” According to a press release, on average, the snowpack supplies about 30 percent of California’s water needs as it melts in the spring and early summer. 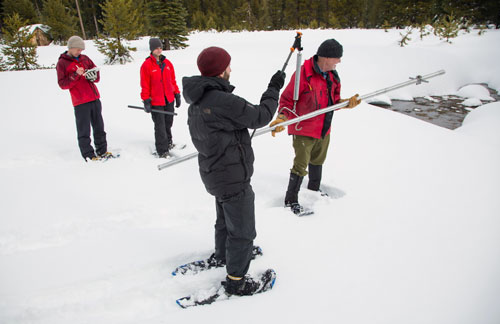 Some other highlights from DWR’s February 2 press release include:

It should be made clear, however, that this spell of wet weather has not ended the drought. The DWR reinforced that California’s weather often fluctuates, and to not rely on just one season’s rain to pull us out of our persistent dryness.

“In the last 10 water years, eight have been dry, one wet, one average,” added State Climatologist Mike Anderson. “Hopefully this year will end up being wet, but we cannot say whether it will be one wet year in another string of dry ones.”

With many more snowpack level measurements scheduled to take place before the season is done, ANUK will continue to share the latest developments.