“There is a very destructive core as part of Cyclone Debbie, and we are monitoring that on an hourly basis,” Annastacia Palaszczuk, Queensland’s Premier shared in a statement. “We had to take the unprecedented step yesterday afternoon of seeking to evacuate some 25,000 people.”

As reported by AccuWeather’s Kristina Pydynowski, the storm is expected to pass through the Queensland coast between between the towns of Townsville and Mackay. A Category 4 storm on the Australian scale entails gusts of more than 140 miles per hour, with Palaszczuk noting that to her knowledge, winds are expected to increase to over 160 miles per hour.

“People living in coastal or low-lying areas prone to flooding should follow the advice of local emergency services and relocate while there is time,” warned Bruce Gunn, Regional Director of Queensland’s Bureau of Meteorology.

According to a Bureau press release, Cyclone Debbie is likely to maintain cyclone-level strength for some distance overland, with damaging to destructive winds, delivering significant rainfall as it tracks to the west-southwest. The Bureau is currently expecting daily rainfall totals between 6 and 10 inches for regions in Debbie’s path, with isolated precipitation in excess of 16 inches possible along the coastal fringe. 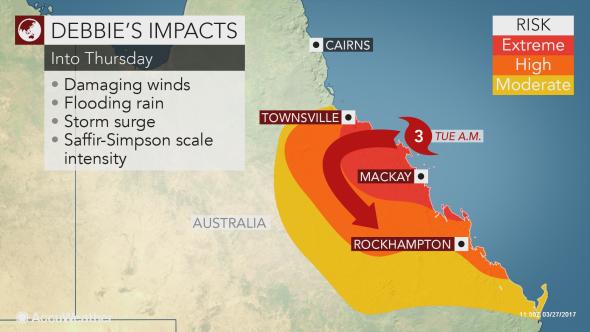 The country launched a Flood Watch for the coast between Rollingstone to Gladstone, extending inland to the upper Flinders, upper Thomson, and Barcoo. Initial Flood Warnings have been issued for the Don and Pioneers Rivers, and further flood warnings are expected. In general, the Bureau is warning those in the area of abnormally high tides, large waves, storm surge, and rough to phenomenal seas.

As more information about Cyclone Debbie and her impending path is reported, AndNowUKnow will provide you with the latest.