LOS ANGELES, CA - Model Chrissy Teigen, who made her debut in Sports Illustrated, has steadily gained notoriety as a sassy Twitter sensation during her years in the public eye. Now, she’s used that attention to go where no celebrity has gone before: crowdsourcing produce. 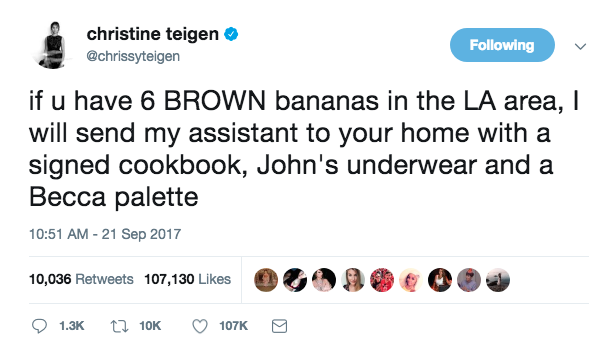 Rather than the traditional move of asking a neighbor for a cup of sugar Teigen, who is married to singer John Legend, took to her 7.5M fans on Twitter, asking followers if they could spare some brown bananas for a special banana bread recipe. She even offered to swap her husband's celebrity skivvies to up the stakes of the deal.

In the onslaught of responses, Teigen delivered specific instructions to validate credibility and narrated the transaction with her wry sense of humor.

Upon culmination of the swap, Teigen delighted fans by detailing her culinary exploits through videos and even shared the highly-demanded recipe on her Instagram.

Heading into the final week of recipe developing for #cravings2!!! You guys have been such a huge part of this one...I've loved seeing what you guys enjoyed making the most and learning what you want more of. You guys...are awesome. And I miss posting food. I'm going to instagram a lot more freaking food and if you don't like it you can suck it! Love you.

I don't know about you, but I think Chrissy Teigen might be on to something, and really, I'm always happy to see produce getting its moment in the limelight.