CHARLOTTE, NC - Frozen 2 hit theaters last Friday, whipping up a frenzy of excitement among dedicated fans. To celebrate, Dole launched two new ways for fruit and veggie enthusiasts to herald the return of Elsa, Anna, and Olaf. The social media activations allow Dole and Disney fans to customize a Frozen 2-inspired experience, all part of Dole’s three-month healthy-lifestyle collaboration with the long-awaited film.

According to a press release, these social media activations comprise of: 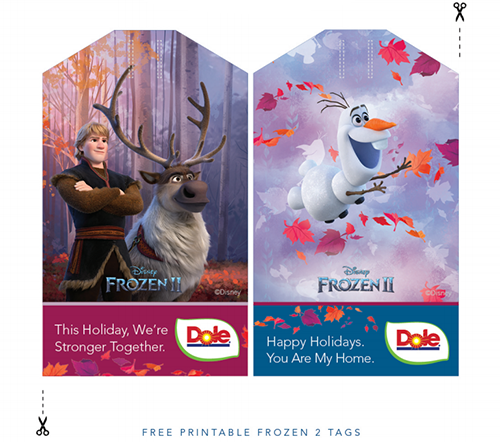 The social offerings are part of Dole’s “Powering the Hero Within,” which offers parents and others a flurry of activities to encourage their kids and families toward healthy living and meals rich in fresh fruits and vegetables. This latest Dole initiative celebrating Disney’s Frozen 2 is part of a multiyear nutritional alliance with The Walt Disney Company.

In addition, Dole is using a host of expanded tactics to distribute its new recipes including print and digital placements, how-to recipe videos, and social enhancements. Other campaign elements include a dedicated campaign web page, digital banner ads, and a storm of social media posts. The fresh produce leader is also partnering with top-tier family, health, and fitness bloggers and social media influencers to host Disney’s Frozen 2-themed contests, recipe-development initiatives, and other programs.

Now through January 2020, shoppers will find images of Anna, Elsa, Olaf, Sven, and Kristoff on millions of DOLE® Bananas and Pineapples at supermarkets throughout the U.S. and Canada. Disney and Dole fans can participate in the DOLE® Banana Sticker Peel and Play Game by downloading the official activity sheet on www.dole.com/Disney and collecting the entire blizzard of 20 Disney’s Frozen 2-inspired stickers.

For the latest in merchandising, marketing, and more, stick with AndNowUKnow.