FORT MILL, SC - Don't fear the Reaper any longer, there is a bigger fish to fry. Or we should say that could fry you.

It isn't called the Pucker Butt Pepper Company for nothing, and it has outdone itself. This South Carolina ring of fire has knocked the two-year-long Guinness’ hottest pepper in the world, the Carolina Reaper, off of its throne.

Though we aren’t sure if it will actually kill you, it might. It's called the HP 56 Death Strain, and it is not for the faint of heart. 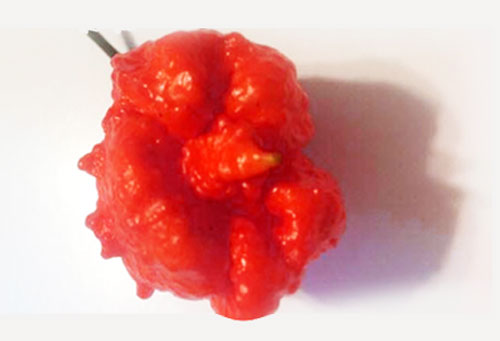 According to the Charlotte Business Journal, the Death Strain clocks in on the Scoville Scale (the Richter Scale of chili peppers) at nearly three million units of heat. To put that into perspective, the Reaper is registered at about 2.2 million, while your average jalapeño pepper barely registers on their level ranging between 1,000 to 10,000 units.

Created by "man on fire," Ed Currie, both the Death Strain and Carolina Reaper were born from the same company. Evidently Pucker Butt Pepper felt that a marriage of the Bhut jolokia and Habanero peppers was just not enough.  Though the results have yet to officially be published, according to the Chile Foundry the two have already been rated as far as who is hotter, and the Death Strain wears the crown.

Whether trying this new creation would make you question your sanity or give you a new lease on life remains to be seen. But prepare yourself, and be sure to keep a carton of milk on standby.