MCLEAN, VA – The industry has been keeping a close eye on California and its crop, as the state navigates its way through a longtime drought and recent deluge of rain. As our home state enjoys a breather from winter weather, Gladstone Land Corporation has released a report on its analysis of the state’s water, indicating the recent precipation has been beneficial to the industry.

"The wet winter weather has been a great relief to farmers in California, as rain and snow are both important to the supply of irrigation water," stated Bill Reiman, West Coast Managing Director of the Company. "Whether it's rain that recharges groundwater wells and fills reservoirs or snow that melts in late spring and summer, providing continued runoff for the main irrigation season, water is key to good growing seasons.” 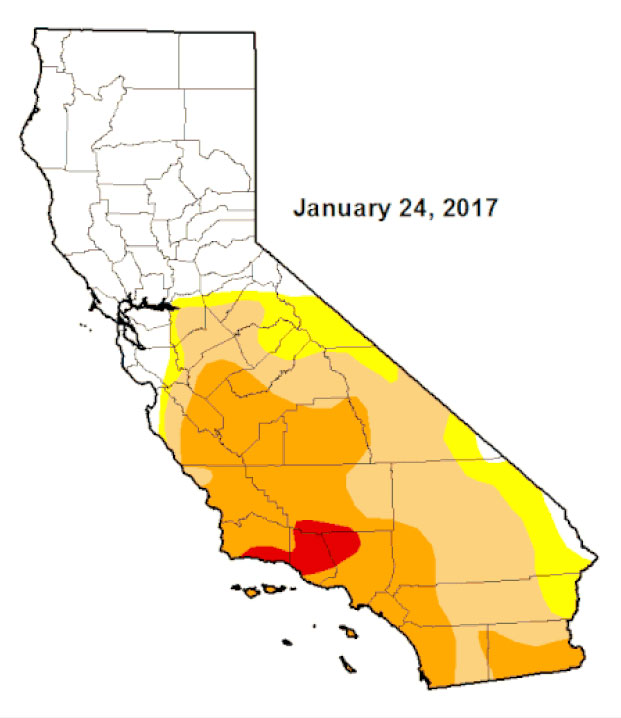 The company stated that California is continuing to experience drought relief in addition to being well on track to have one of its wettest winters, according to a press release. As of right now, Gladstone does not expect any of its farms to feel any negative impacts from flooding which may have resulted from the excessive rains.

“While all our farms have wells that provided plenty of water during the last four years of the drought, more abundant access to water is welcome news to farmers across the state,” Bill continued. “We are seeing ground water levels rising in our wells on the coast, and many lakes are filling up. It's always exciting to get the new growing season off to such a good start."

Gladstone stated that as of January 24, 2017, the season’s precipitation totals for California’s main reporting stations ranged between 215% and 232% of its norm. The snowpack levels, said the company, are 228% of normal in the southern part of the state, and 193% across the whole of California.

Our team has been reporting on the state of California’s drought and rainfall with continual developments. Forecasters from several organizations have predicted that due to the recent bouts of rain and snow, California’s snowpack is now better equipped to handle the upcoming summer months.

As the state continues to move through the remaining winter months with warm weather far off on the horizon, AndNowUKnow will have the latest on weather’s impact on California crops.