WASHINGTON, DC - Today marks the 35th day of the government shutdown, with still no end in sight. Yesterday, January 24th, the Senate voted on two competing proposals, both taking stabs at pushing forward differing border policies and ending the longest shutdown in America’s history. President Trump’s proposal allocates $5.7 billion for a border wall in addition to changes to immigration laws, while the Democratic proposal includes no fund for a wall but does provide two weeks of operating money for the government, according to a report by NPR. Both were just shy of the 60 votes needed to pass.

Since both proposals failed to move forward, border wall funding remains the fuel to the government shutdown’s fire. NPR reports that Senator Lindsey Graham, R-S.C., announced on the Senate floor that a three-week stopgap bill will be in talks as a means to reopen the government. However, White House Press Secretary Sarah Sanders released a statement asserting that the White House had “already made it clear to Graham that a three-week bill would only work if there is a large down payment on the wall.”

Following the vote, President Trump took to the Twitter void to yell, “Very simply, without a Wall it all doesn’t work. Our Country has a chance to greatly reduce Crime, Human Trafficking, Gangs and Drugs. Should have been done for decades. We will not Cave!” 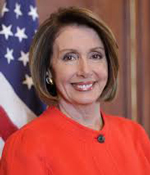 On the opposite side, Speaker Nancy Pelosi of California also demonstrated an inability to budge, stating: “I’m still optimistic in the goodness of the Republicans in the Senate, that they will care enough about these people, that they will say, ‘Ok, we’ll give two weeks so that we can negotiate an evidence-based, cost-effective, value-respecting way to protect the American people with border security. That doesn’t seem like a big ask.”

When will the government shutdown end? AndNowUKnow will continue to report on all breaking news.