LOS ANGELES, CA - Watch out LA, there’s about to be a new contender in your city’s grocery wars.

Grocery Outlet Bargain Market has announced the addition of 14 new stores throughout the Los Angeles area beginning this December, and continuing at a rapid pace throughout 2016. All this less than one week after Haggen announcing it has failed to make a significant impact in the Southern California market.

Grocery Outlet says the company sets itself apart from other discount retailers by offering name brands at prices up to 60 percent off traditional supermarkets. This year alone, the chain claims that shoppers have saved more than $1 billion on products purchased at Grocery Outlet as compared to traditional grocery stores.

"It's fun to watch eyes pop and jaws drop when people come to our stores the first time and see such extreme bargains on the brands they love," said Eric Lindberg, Co-CEO of Grocery Outlet. "There is a reason we label products with discounts over 50 percent as 'WOW' deals. It's often the first thing shoppers say when they realize how much money they'll save.”

The first stores are scheduled to open in Costa Mesa on December 3 and Westminster on December 10, marking a comeback for the 227-unit chain in the area. Grocery Outlet previously operated outlets in Buena Park and Fountain Valley, but closed those stores a few years ago when the leases expired, saying the company wished to regroup at the time, according to the OC Register. Now, it appears the retailer is ready for its next moves, with a total of 35 stores planned over the next two years in the Los Angeles area. 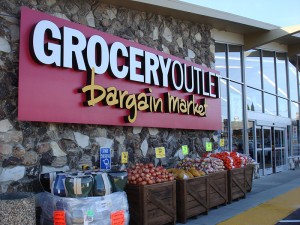 Grocery Outlet Bargain Market uses a unique buying model to achieve its low prices. According to a press release, Grocery Outlet buyers negotiate directly with manufacturers to buy overstock and surplus products at deep discounts and pass those savings directly on to customers.

In addition to bringing affordable, healthy options to the Los Angeles area, Grocery Outlet will be attempting to make an impact in the local communities as well. All of the company’s stores are independently owned and operated by residents in or near the communities they serve.

"Giving back to the Los Angeles community is a big priority," said MacGregor Read, Co-CEO of Grocery Outlet. "My grandfather started this business nearly 70 years ago. As a family-run business, we're proud to say our values are reflected in each of our stores. From supporting little league teams to donating food to those in need, our local owners share our commitment to making a lasting impact."

With the opening of the first 14 stores alone, the independent Grocery Outlet operators will create jobs for approximately 500 people.