UNITED STATES - Any day that I get to write about Jeff Goldblum is a really tremendous day, and today just happens to be spectacular. In a recent video, the Jurrasic Park star takes Funny or Die viewers on a trip through Ralphs to get to know produce a little better as only Jeff Goldblum can do in his suave and tantalizing way. From there, he embarks on a culinary excursion with his Jurassic World co-star Bryce Dallas Howard, as they create a produce-focused meal together.

The segment is called Cooking with Jeff, and this being the second round for Deputy Kovacs proves viewers are liking when Goldblum works with produce beyond his role with Boy with Apple.

Goldblum starts off by crooning viewers with a little sumthin’ sumthin’ before inviting them with, “You’d be so nice to come home to,” and we’re off to a good start, if you ask me!

First, he is off to Ralphs for the produce and ingredients needed to make the magic happen. He looks to his Ralphs app to find his shopping list, a helpful tip he points out for viewers to take note.

The first item on the list is none other than avocado, or, as he calls it, the “King of All Fruits or Vegetables,” and he turns to the Produce Manager on site, Tony. Shocked, Goldblum is told avocados are a fruit, educating both the actor and viewers invested in his experience. 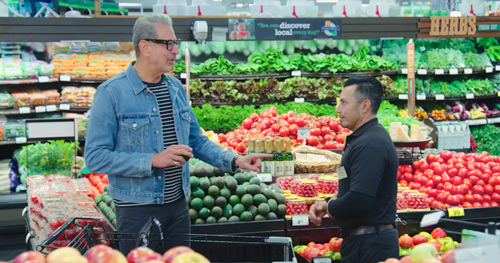 Goldblum, ever the jokester, asks Tony to refer to him as a fruit or vegetable, to which Tony calls Goldblum a dragon fruit because he is sweet—side note, great pick, Tony, wherever you are!

Back in the zone, Goldblum makes his way through the store to locate the remainder of his ingredients—including cheese, bread, and lime juice.

Once he arrives back at his house, Goldblum introduces viewers to his surprise guest, Howard. Together, the parents find they are plagued with the task of cooking for their kids when the act itself seems so daunting. Celebrities—they’re just like us! But, they make it so approachable for consumers to look to produce for the answers to their puzzled mealtimes, especially when Goldblum opts for a safer way to cut the pit out of an avocado than Howard’s proposed knife stab. No case of Avocado Hand here, folks! 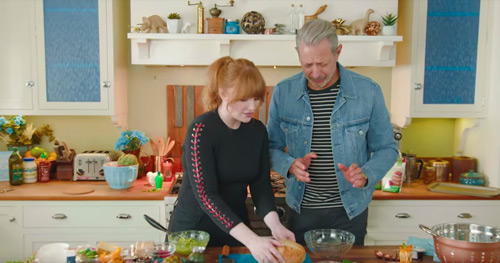 The Jurrasic World team comes together to create two beautiful avocado toasts with fried eggs that would tame any T-rex tot at home. They also created a beautifully crafted woodboard, full of artichoke, berries, deli meats, and sliced veggies.

As they make consumers swoon at their colorful creations, Goldblum and and Howard enjoy their produce-packed bites and healthy meal together on the patio, creating a luxurious appeal to lifestyles and meals stemming from the produce aisle.

How will Goldblum’s latest foray into the culinary scene impact consumers’ interest in fresh produce? AndNowUKnow will keep you up-to-speed with the latest trends in our industry.