LOS ANGELES, CA - Would you be able to resist flinching as high-velocity fruit smacked in front of your face, guarded by nothing more than a plastic screen?

That was the challenge presented to celebrities and high profile influencers Jessica Alba, Kate Mara, and Ken Jeong when they appeared on the CBS’s Late Late Show earlier this week. 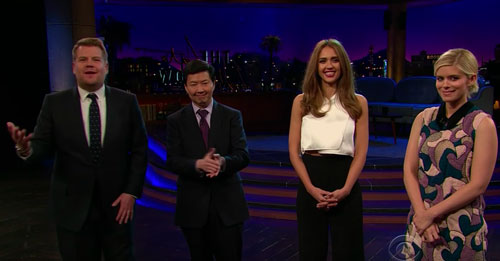 “My face [the catapult] will be spitting various fruits and produce, your job is to stand behind that glass and not flinch when it’s fired at you,” Late Late Show host James Corden told the celebrities when explaining what they have signed up for.

The catapult is no joke. James successfully distracts Ken just before the first shot is fired, and then it comes out at top speed. An apple becomes juice against the glass, directly in front of the actor’s face.

Needless to say, he did flinch.

Jessica Alba professed a love of avocados, requesting the green, on-trend fruit for her flinch challenge. But, as soon as James asks her what she had for breakfast, she screams as the avocado becomes amunition against her. 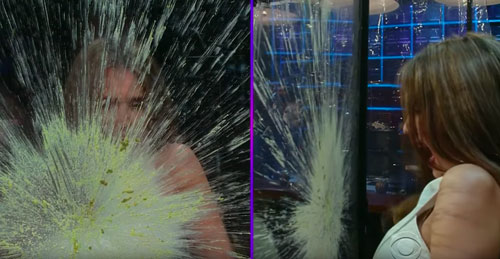 Kate Mara is the last, and absolutely refuses to engage the host in conversation as she waits nervously for a fruit to be fired at her.

In a final twist, James himself goes behind the glass, and the three are thrilled to strategize just revenge. They look for the hardest produce item, they elect who will fire, and who will distract him with questions, but does he flinch?

Find out in the final moments of the clip below!

As a spectator, I can say firsthand that I flinched every time I heard the fruit cannon fire, and would not have faired any better than the celebrities the show subjected to the game. But it certainly made for a great way to make this Friday a little more fun for the AndNowUKnow team, we hope it brought just as much fruit-filled joy to yours.