TEXAS - It’s no secret that Texas recently went through a rough patch of weather, with overall rain, West Texas snow, Dallas tornados, and South Texas thunderstorms making an appearance over the New Year’s weekend during Winter Storm Goliath. Thankfully, however, it looks like Texas produce is proving to be resilient in the face of the storm.

“Our last cold front brought damaging winds and a steady light rain for five consecutive days,” said Jimmy Bassetti, Partner/Owner of J&D Produce. “The wind caused a small percentage of wind burn to some of our tender crops, like Dandelions, Mustard and Turnip Greens, and Swiss Chards. Because both Florida and California have experienced some quality-affecting issues as well, this damage is not affecting our business.”

South Texas saw only between 1.5 to 3 inches of rain, but since the fall was constant over the five days, it created what J&D calls “a soaker.” Soakers cause soil to become extremely muddy, slowing down some field work. 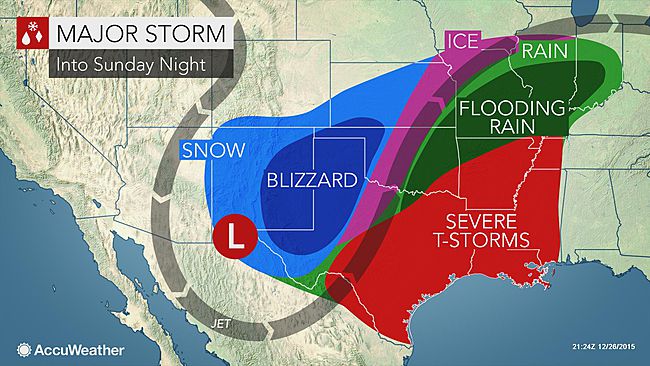 “The soaker slowed down harvesting down by 50% and combined with temperatures only reaching 42F for a high we fell behind on filling orders,” Bassetti continued. “We planted prior to forecast so we did not fall behind on planting schedules. So the primary adverse effect was harvesting.”

That seemed to be the consensus when I asked other Texas growers how the season was faring after the storm. Grow Farms Texas’ Director of Sales Tommy Wilkins echoed Bassetti's harvest report, but remained optimistic.

“Rains over New Year’s weekend made it tough to harvest, as our fields have remained cloudy and muddy. The winds have been lighter, so the fields have not been drying out as quickly,” Wilkins shared with me. “All we need now is to get back into our rhythm after Christmas and New Year’s disrupted normal schedules.”

Texas International Produce Association’s CEO Bret Erickson had an equal sense of optimism about the Texas produce season when I spoke with him. Saying perhaps the cold snap even benefitted the region’s quality.

“During the cold snap, most areas received 1-2 inches of rain, some a little less, some a little more, but the moisture was spread over several days which was great in that it didn’t cause any crop damage and slowly soaked into the soil,” Erickson corroborated. “Harvesting slowed down a little bit during those 3 or 4 days but nothing that would severely alter supplies coming out of Texas. In fact, the cold snap and moisture really helped to improve the overall heartiness of many of the greens that are grown here further improving what already has been a high-quality season for most growers.”

With all three produce powerhouses confirming little to no crop damage and only slightly slowed harvests, it looks like Texas has squeezed by Goliath relatively unscathed. For more on the Texas season as it continues, AndNowUKnow will keep updating you on the latest.