SACRAMENTO, CA - Storm after storm has brought just what Californians have been hoping for—some sweet relief from the drought. According to yesterday’s report from the U.S. Drought Monitor, just 17 percent of the state remains in conditions that the state considers a drought.

“Days of heavy precipitation continued to improve mountain snowpack, but created areas of flooding,” shared Richard Heim, author of this week’s Drought Monitor report and a meteorologist with NOAA/NCEI.

This comes not long after October’s report, when almost 84 percent of the state was still in drought. Thursday’s report now claims that no districts in California are classified as in “extreme drought” for the first time in four years. As reported by The Mercury News, every coastal county north of San Luis Obispo and all of the Central Valley and Sierra Nevada are completely drought-free. The only nine 58 counties that are suffering from drought are in Southern California—notably Ventura, Santa Barbara, and Imperial counties. 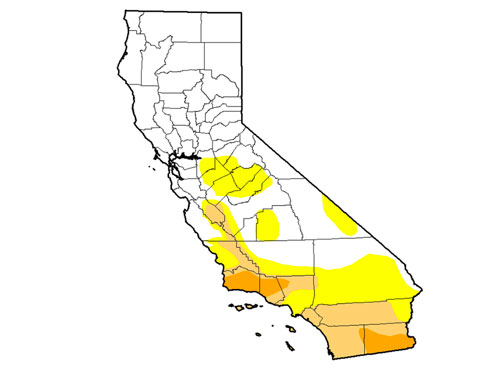 Reports on Thursday also highlighted that the Sierra snowpack, one of California’s key indicators of being able to store water once the rainy season dies down, was 188 percent of its historic average for the date. The snowpack is also at 154 percent of the much-watched April 1 average, and even more storms and snow are forecast for the upcoming weekend.

Legally, California still remains in a drought emergency that was declared by Gov. Jerry Brown in January 2014, The Orange County Register noted in its report. State officials predict Brown will wait until April, the typical end of the rainy season, to either alter or rescind that declaration.

Will these conditions remain even after the rainy season ends? Keep watching AndNowUKnow for the latest updates on California's ongoing battle.